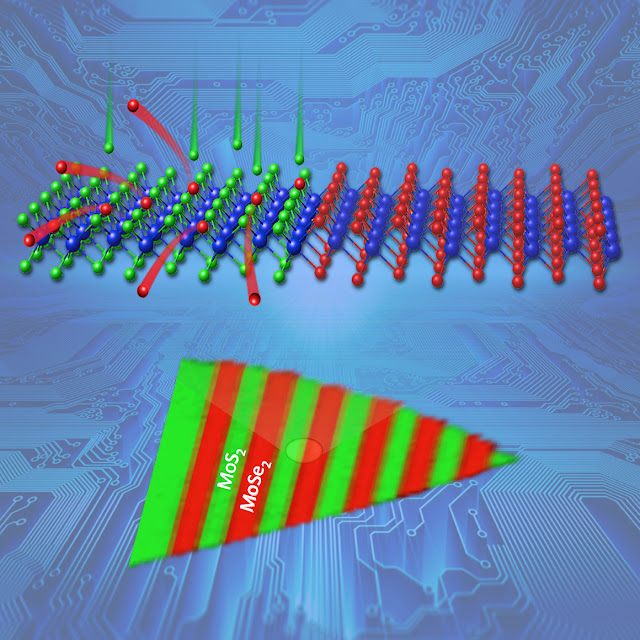 (July 23, 2015)  Semiconductors, metals and insulators must be integrated to make the transistors that are the electronic building blocks of your smartphone, computer and other microchip-enabled devices. Today’s transistors are miniscule—a mere 10 nanometers wide—and formed from three-dimensional (3D) crystals.

Now for the first time, researchers at the Department of Energy’s Oak Ridge National Laboratory have combined a novel synthesis process with commercial electron-beam lithography techniques to produce arrays of semiconductor junctions in arbitrary patterns within a single, nanometer-thick semiconductor crystal. The process relies upon transforming patterned regions of one existing, single-layer crystal into another. The researchers first grew single, nanometer-thick layers of molybdenum diselenide crystals on substrates and then deposited protective patterns of silicon oxide using standard lithography techniques. Then they bombarded the exposed regions of the crystals with a laser-generated beam of sulfur atoms. The sulfur atoms replaced the selenium atoms in the crystals to form molybdenum disulfide, which has a nearly identical crystal structure. The two semiconductor crystals formed sharp junctions, the desired building blocks of electronics. Nature Communications reports the accomplishment.