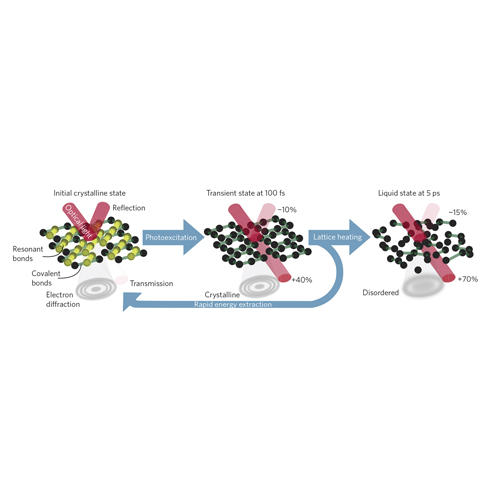 (July 29, 2015)  Rewritable CDs, DVDs and Blu-Ray discs owe their existence to phase-change materials, those materials that change their internal order when heated and whose structures can be switched back and forth between their crystalline and amorphous phases. Phase-change materials have even more exciting applications on the horizon, but our limited ability to precisely control their phase changes is a hurdle to the development of new technology.

One of the most popular and useful phase-change materials is GST, which consists of germanium, antimony, and tellurium. This material is particularly useful because it alternates between its crystalline and amorphous phases more quickly than any other material yet studied. These phase changes result from changes in the bonds between atoms, which also modify the electronic and optical properties of GST as well as its lattice structure. Specifically, resonant bonds, in which electrons participate in several neighboring bonds, influence the material’s electro-optical properties, while covalent bonds, in which electrons are shared between two atoms, influence its lattice structure. Most techniques that use GST simultaneously change both the electro-optical and structural properties. This is actually a considerable drawback since in the process of repeating structural transitions, such as heating and cooling the material, the lifetime of any device based on this material is drastically reduced.

In a study recently published in Nature Materials, researchers from the ICFO groups led by Prof. Simon Wall and ICREA Prof. at ICFO Valerio Pruneri, in collaboration with the Firtz-Haber-Institut der Max-Planck-Gesellschaft, have demonstrated how the material and electro-optical properties of GST change over fractions of a trillionth of a second as the phase of the material changes. Laser light was successfully used to alter the bonds controlling the electro-optical properties without meaningfully altering the bonds controlling the lattice. This new configuration allowed the rapid, reversible changes in the electro-optical properties that are important in device applications without reducing the lifetime of the device by changing its lattice structure. Moreover, the change in the electro-optical properties of GST measured in this study is more than ten times greater than that previously achieved by silicon materials used for the same purpose. This finding suggests that GST may be a good substitute for these commonly used silicon materials.