Changing the color of light 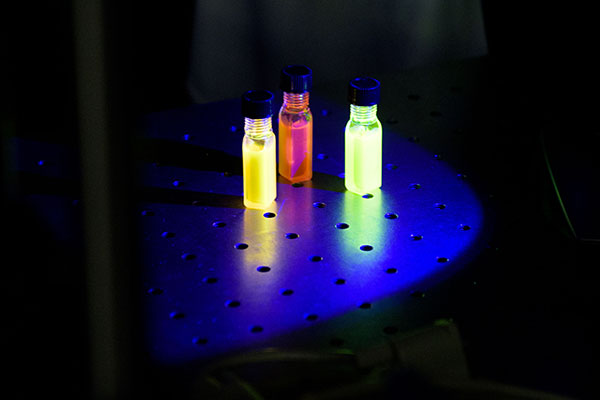 (July 24, 2015)  Researchers at the University of Delaware have received a $1 million grant from the W.M. Keck Foundation to explore a new idea that could improve solar cells, medical imaging and even cancer treatments. Simply put, they want to change the color of light.

They won’t be tinkering with what you see out your window: no purple days or chartreuse nights, no edits to rainbows and blazing sunsets. Their goal is to turn low-energy colors of light, such as red, into higher-energy colors, like blue or green.

Changing the color of light would give solar technology a considerable boost. A traditional solar cell can only absorb light with energy above a certain threshold. Infrared light passes right through, its energy untapped.

However, if that low-energy light could be transformed into higher-energy light, a solar cell could absorb much more of the sun’s clean, free, abundant energy. The team predicts that their novel approach could increase the efficiency of commercial solar cells by 25 to 30 percent.