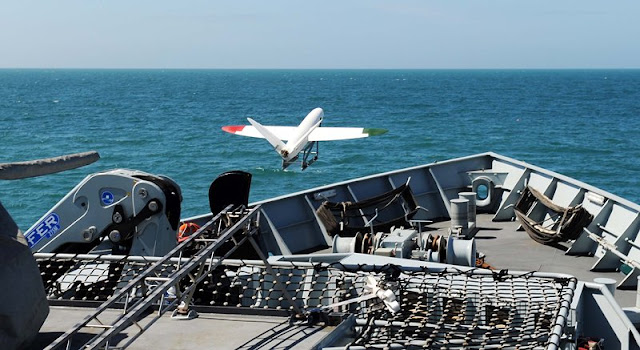 A 3D printed aircraft has successfully launched off the front of a Royal Navy warship
and landed safely on a Dorset beach.

(July 23, 2015)  HMS Mersey provided the perfect platform for the University of Southampton to test out their SULSA unmanned aerial vehicle (UAV).

Weighing 3kg and measuring 1.5m the airframe was created on a 3D printer using laser sintered nylon and catapulted off HMS Mersey into the Wyke Regis Training Facility in Weymouth, before landing on Chesil Beach.

The flight, which covered roughly 500 metres, lasted less than few minutes but demonstrated the potential use of small lightweight UAVs, which can be easily launched at sea, in a maritime environment. The aircraft carried a small video camera to record its flight and Southampton researchers monitored the flight from their UAV control van with its on-board video-cameras.

Known as Project Triangle the capability demonstration was led by Southampton researchers, making use of the coastal patrol and fisheries protection ship.

Professor Andy Keane, from Engineering and the Environment at the University of Southampton, says: “The key to increased use of UAVs is the simple production of low cost and rugged airframes – we believe our pioneering used of 3D printed nylon has advanced design thinking in the UAV community world-wide.”