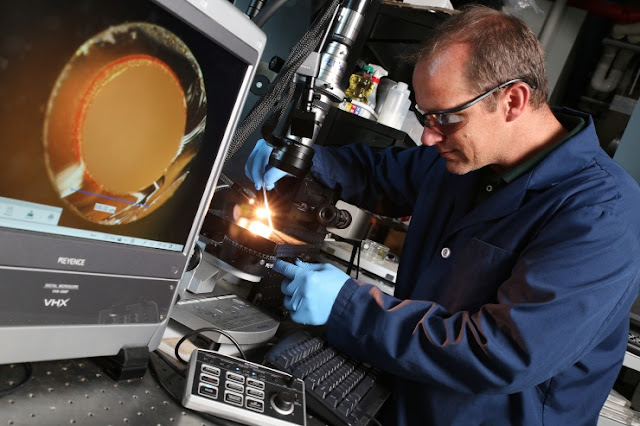 (July 27, 2015)  Coating the inside of glass microtubes with a polymer hydrogel material dramatically alters the way capillary forces draw water into the tiny structures, researchers have found. The discovery could provide a new way to control microfluidic systems, including popular lab-on-a-chip devices.

Capillary action draws water and other liquids into confined spaces such as tubes, straws, wicks and paper towels, and the flow rate can be predicted using a simple hydrodynamic analysis. But a chance observation by researchers at the Georgia Institute of Technology will cause a recalculation of those predictions for conditions in which hydrogel films line the tubes carrying water-based liquids.

“Rather than moving according to conventional expectations, water-based liquids slip to a new location in the tube, get stuck, then slip again – and the process repeats over and over again,” explained Andrei Fedorov, a professor in the George W. Woodruff School of Mechanical Engineering at Georgia Tech. “Instead of filling the tube with a rate of liquid penetration that slows with time, the water propagates at a nearly constant speed into the hydrogel-coated capillary. This was very different from what we had expected.”