Increased Protein Turnover Contributes to the Development of Pulmonary Fibrosis 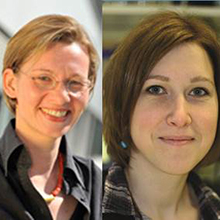 (July 27, 2015) Scientists of the Comprehensive Pneumology Center (CPC) at the Helmholtz Zentrum München have identified a new mechanism which contributes to the development of idiopathic pulmonary fibrosis (IPF). They showed that the pathological changes of lung tissue are accompanied by an increase in protein turnover by the central protein degradation machinery of the cell – the proteasome. Their study has now been published in the ‘American Journal of Respiratory and Critical Care Medicine’.

Idiopathic pulmonary fibrosis is a very aggressive form of pulmonary fibrosis and has a particularly poor prognosis. This fatal disease, for which so far no causal therapies exist, is characterized by a massive deposition of connective and scar tissue in the lung, which leads to a progressive loss of lung function and ultimately death. Connective tissue is mainly produced by myofibroblasts. The research group led by PD Dr. Silke Meiners of the Institute of Lung Biology and the CPC showed now for the first time that the activation of these myofibroblasts depends on increased protein turnover by the 26S proteasome*.