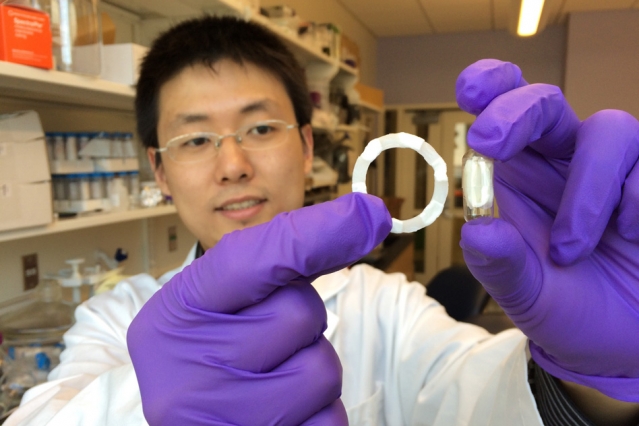 (July 28, 2015)  Medical devices designed to reside in the stomach have a variety of applications, including prolonged drug delivery, electronic monitoring, and weight-loss intervention. However, these devices, often created with nondegradable elastic polymers, bear an inherent risk of intestinal obstruction as a result of accidental fracture or migration. As such, they are usually designed to remain in the stomach for a limited time.

Now, researchers at MIT’s Koch Institute for Integrative Cancer Research and Massachusetts General Hospital (MGH) have created a polymer gel that overcomes this safety concern and could allow for the development of long-acting devices that reside in the stomach, including orally delivered capsules that can release drugs over a number of days, weeks, or potentially months following a single administration.

This polymer is pH-responsive: It is stable in the acidic stomach environment but dissolves in the small intestine’s near-neutral pH, allowing for safe passage through the remainder of the gastrointestinal (GI) tract. The material is also elastic, allowing for the compression and folding of devices into easily ingestible capsules — meaning this polymer can be used to create safe devices designed for extremely prolonged residence in the stomach.

“One of the issues with any device in the GI tract is that there’s the potential for an obstruction, which is a medical emergency potentially requiring surgical intervention,” says Koch Institute research affiliate Giovanni Traverso, also a gastroenterologist at MGH and an instructor at Harvard Medical School. “A material like this represents a real advance because it is both safe and stable in the stomach environment.”