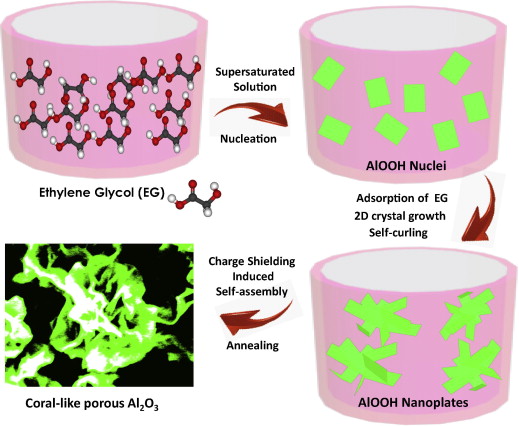 (July 23, 2015)  Biomimetic self-curled nanoplates assembled coral-like nanoporous γ-Al2O3 has been prepared by a solvothermal method using ethylene glycol (EG)single bondH2O as the mixed solvent, followed by the annealing process. The resulting samples are composed of micro/nanostructured units (∼1.5 μm) with self-curled porous nanoplates on the surface. The volume ratio of EG to water in precursor solution is crucial for the formation of coral-like structure. The formation process is investigated to be an assembly process with self-curled nanoplates driven by adsorption of EG. Importantly, the coral-like porous γ-Al2O3 has high surface area of 64.18 m2/g and exhibits enhanced adsorption performance for efficient removal of heavy metal Hg(II) (49.15 mg/g). The removal capacity is higher than (∼2.5 times) those of commercial Al2O3 nanoparticles and hollow structured γ-Al2O3 prepared without EG (∼2.7 times). Further investigation shows adsorption behaviors of the coral-like γ-Al2O3 and the alumina hollow structure can be well described by Langmuir isotherm model, whereas that of commercial Al2O3 nanoparticles fits Freundlich isotherm model. This work not only provides an inspiration for high efficient biomimetic adsorbent but also presents a facile route for coral-like γ-Al2O3 preparation.