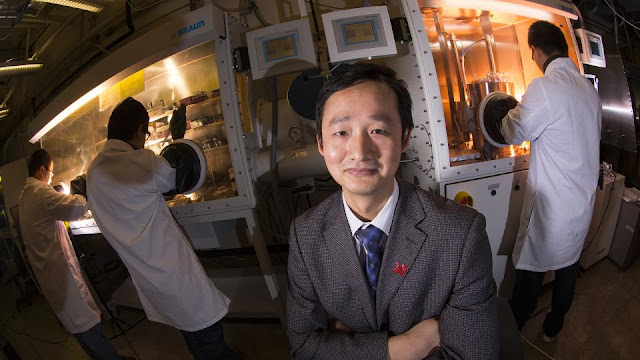 (July 20, 2015)  The same quality that buffers a raincoat against downpours or a pan against sticky foods can also boost the performance of solar cells, according to a new study from UNL engineers.

Published July 20 in the journal Nature Communications, the study showed that constructing a type of organic solar cell on a "non-wetting" plastic surface made it 1.5 times more efficient at converting sunlight to electricity.

The researchers used the technique to grow polycrystalline cells, which are less expensive, faster and easier to produce than those made from only a single crystal. Yet single-crystal cells have traditionally boasted better efficiency, partly because they feature far fewer grains -- fragments akin to microscopic puzzle pieces.

The barriers between these grains reduce cell efficiency by trapping and recombining negatively charged electrons with their positively charged "holes," which ideally produce electric current by migrating in opposite directions following their separation by photon-carrying sunlight.

Lead author Jinsong Huang and his team sought to reduce the number of these efficiency-draining barriers by increasing the size of the grains themselves. Though grain size is typically limited to the thickness of a solar cell, Huang's team found that a non-wetting surface allowed it to fabricate grains up to eight times larger than the cell is thick.