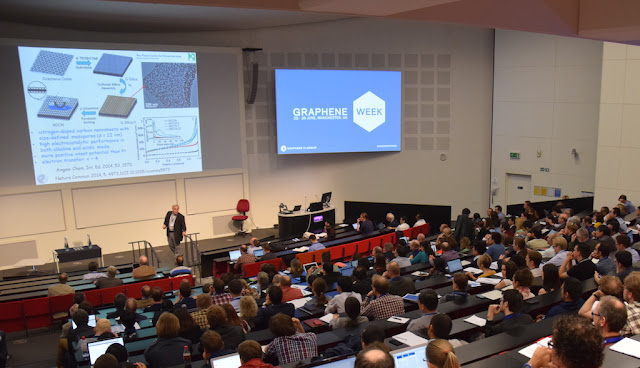 (July 24, 2015)  Keynote presentations on the third day of Graphene Week 2015 offered an eclectic mix of fundamental science and practical chemical engineering. Here we report briefly on each of the talks, beginning with an introduction to optoelectronics in 2d semiconductors and heterostructures, and concluding with an outline of a highly promising ‘kitchen sink’ approach to graphene production.

Optoelectronics of 2D semiconductors and heterostructures

Xiaodong Xu of the University of Washington in Seattle set the ball rolling with a look at the optoelectronics and valleytronics of 2d semiconductors and heterostructures, such as those based on the sulphides and selenides of molybdenum and tungsten. Xu began with a recap of the electronic properties of MoS2, including the change in band gap with number of layers.

Of particular interest to Xu are valley-specific interlayer excitons in monolayer WSe2-MoSe2 vertical heterostructures. Optical pumping leads to coupled spin-valley polarisation of interlayer excitons, with measured lifetimes of more than 30 nanoseconds. Such long-lived polarisation allows for the visualisation of both spin and valley diffusion over length scales of several microns.

In practical terms, the effect is important in laser technologies with a tuneable carrier density.