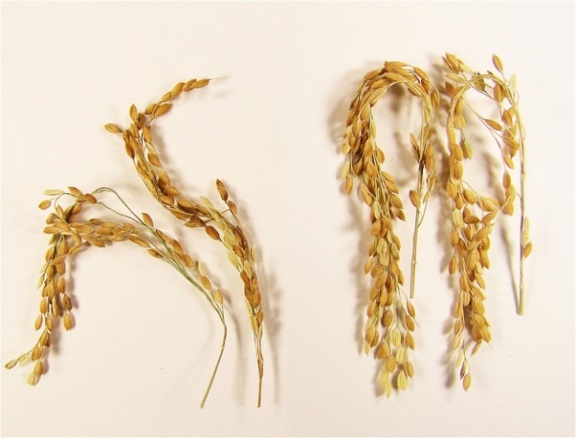 (July 29, 2015)  Rice serves as the staple food for more than half of the world's population, but it's also the one of the largest manmade sources of atmospheric methane, a potent greenhouse gas. Now, with the addition of a single gene, rice can be cultivated to emit virtually no methane from its paddies during growth. It also packs much more of the plant's desired properties, such as starch for a richer food source and biomass for energy production, according to a study in Nature.

With their warm, waterlogged soils, rice paddies contribute up to 17 percent of global methane emissions, the equivalent of about 100 million tons each year. While this represents a much smaller percentage of overall greenhouse gases than carbon dioxide, methane is about 20 times more effective at trapping heat. SUSIBA2 rice, as the new strain is dubbed, is the first high-starch, low-methane rice that could offer a significant and sustainable solution.

Researchers created SUSIBA2 rice by introducing a single gene from barley into common rice, resulting in a plant that can better feed its grains, stems and leaves while starving off methane-producing microbes in the soil.

The results, which appear in the July 30 print edition of Nature and online, represent a culmination of more than a decade of work by researchers in three countries, including Christer Jansson, director of plant sciences at the Department of Energy's Pacific Northwest National Laboratory and EMSL, DOE's Environmental Molecular Sciences Laboratory. Jansson and colleagues hypothesized the concept while at the Swedish University of Agricultural Sciences and carried out ongoing studies at the university and with colleagues at China's Fujian Academy of Agricultural Sciences and Hunan Agricultural University.