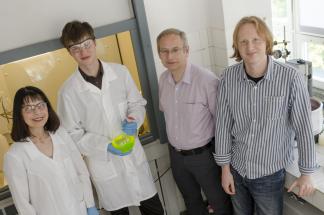 (July 19, 2015)  Researchers at Kaunas University of Technology (KTU) Organic Chemistry laboratories have developed material which offers much cheaper alternative to the one which is currently being used in hybrid solar cells. The efficiency of the semi-conductors created by the team of KTU’s chemists was confirmed at Swiss Federal Institute of Technology Lausanne. The publication on the discovery has been selected among 5 percent most important papers in Angewandte Chemie International Edition, which is one of the prime chemistry journals in the world.

“The material created by us is considerably cheaper and the process of its synthesis is less complicated than that of the currently used analogue material. Also, both materials have very similar efficiency of converting solar energy into electricity. That means that our semiconductors have similar characteristics to the known alternatives, but are much cheaper”, says professor Vytautas Getautis, head of the chemistry research group responsible for the discovery.

The solar cells containing organic semiconductors created at KTU were constructed and tested by physicists at Lausanne. The tests revealed outstanding results: the effectivity of the cells’ converting solar energy into electricity was 16.9 percent. There are only a few organic semiconductors in the world affording such a high solar cell efficiency.

Prof Getautis says that the material created at KTU will be used in the construction of future solar cells: almost all solar cells are made from inorganic semiconductors. Hybrid, semi-organic solar cells are still being developed and perfected at the research centres all over the world.

KTU and Swiss Federal Institute of Technology Lausanne registered the invention at the European Patent Office.