Drawing a line between quantum and classical world: Bell’s Inequality fails as a test of the boundary 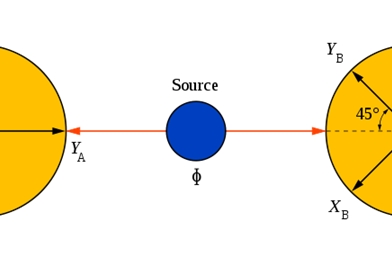 (July 21, 2015)  Quantum theory is one of the great achievements of 20th century science, yet physicists have struggled to find a clear boundary between our everyday world and what Albert Einstein called the “spooky” features of the quantum world, including cats that could be both alive and dead, and photons that can communicate with each other across space instantaneously.

For the past 60 years, the best guide to that boundary has been a theorem called Bell’s Inequality, but now a new paper shows that Bell’s Inequality is not the guidepost it was believed to be, which means that as the world of quantum computing brings quantum strangeness closer to our daily lives, we understand the frontiers of that world less well than scientists have thought.

In the new paper, published in the July 20 edition of Optica, University of Rochester researchers show that a classical beam of light that would be expected to obey Bell’s Inequality can fail this test in the lab, if the beam is properly prepared to have a particular feature: entanglement.

Not only does Bell’s test not serve to define the boundary, the new findings don’t push the boundary deeper into the quantum realm but do just the opposite. They show that some features of the real world must share a key ingredient of the quantum domain. This key ingredient is called entanglement, exactly the feature of quantum physics that Einstein labeled as spooky. According to Joseph Eberly, professor of physics and one of the paper’s authors, it now appears that Bell’s test only distinguishes those systems that are entangled from those that are not. It does not distinguish whether they are “classical” or quantum. In the forthcoming paper the Rochester researchers explain how entanglement can be found in something as ordinary as a beam of light.

Eberly explained that “it takes two to tangle.” For example, think about two hands clapping regularly. What you can be sure of is that when the right hand is moving to the right, the left hand is moving to the left, and vice versa. But if you were asked to guess without listening or looking whether at some moment the right hand was moving to the right, or maybe to the left, you wouldn’t know. But you would still know that whatever the right hand was doing at that time, the left hand would be doing the opposite. The ability to know for sure about a common property without knowing anything for sure about an individual property is the essence of perfect entanglement.

Eberly added that many think of entanglement as a quantum feature because “Schrodinger coined the term ‘entanglement’ to refer to his famous cat scenario.” But their experiment shows that some features of the “real” world must share a key ingredient of Schrodinger’s Cat domain: entanglement.