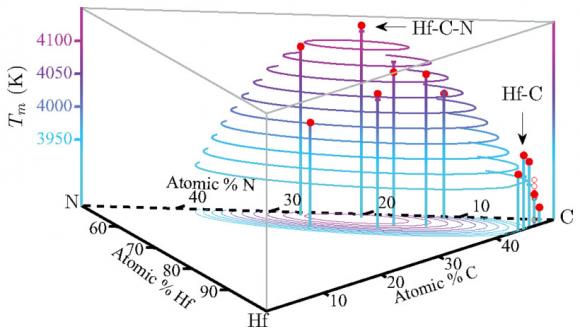 Handling the heat
Compounds made from hafnium and carbon have some of the highest known melting points.
Using computer simulations, Brown University engineers predict that a material
made with hafnium, nitrogen, and carbon will have a higher melting point than
any known material. Image: Van de Walle lab/Brown University

(July 27, 2015)  Using advanced computers and a computational technique to simulate physical processes at the atomic level, researchers at Brown University have predicted that a material made from hafnium, nitrogen, and carbon would have the highest known melting point, about two-thirds the temperature at the surface of the sun.

Using powerful computer simulations, researchers from Brown University have identified a material with a higher melting point than any known substance.

The computations, described in the journal Physical Review B (Rapid Communications), showed that a material made with just the right amounts of hafnium, nitrogen, and carbon would have a melting point of more than 4,400 kelvins (7,460 degrees Fahrenheit). That’s about two-thirds the temperature at the surface of the sun, and 200 kelvins higher than the highest melting point ever recorded experimentally.

The experimental record-holder is a substance made from the elements hafnium, tantalum, and carbon (Hf-Ta-C). But these new calculations suggest that an optimal composition of hafnium, nitrogen, and carbon — HfN0.38C0.51 — is a promising candidate to set a new mark. The next step, which the researchers are undertaking now, is to synthesize material and corroborate the findings in the lab.

“The advantage of starting with the computational approach is we can try lots of different combinations very cheaply and find ones that might be worth experimenting with in the lab,” said Axel van de Walle, associate professor of engineering and co-author of the study with postdoctoral researcher Qijun Hong. “Otherwise we’d just be shooting in the dark. Now we know we have something that’s worth a try.”