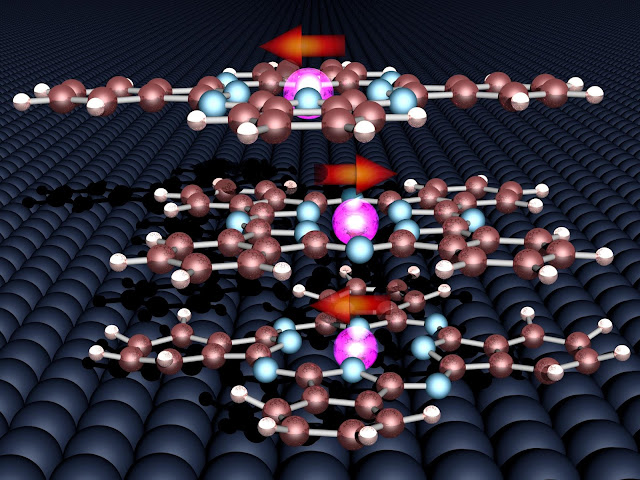 The magnetic moments of the three organic molecules and the cobalt surface align
very stably relative to each other. (Photo: M. Gruber, KIT)

(July 23, 2015)  Organic molecules allow producing printable electronics and solar cells with extraordinary properties. In spintronics, too, molecules open up the unexpected possibility of controlling the magnetism of materials and, thus, the spin of the flowing electrons. According to what is reported in Nature Materials by a German-French team of researchers, a thin layer of organic molecules can stabilize the magnetic orientation of a cobalt surface. (DOI: 10.1038/NMAT4361)

“This special interaction between organic molecules and metal surfaces could help to manufacture information storage systems in a more simple, flexible and cheaper way,” explains Wulf Wulfhekel from KIT. Microscopic magnets with constant orientation are used in hard disks, for example. With a view to “printable electronics”, organic molecules indeed could open up new simple production methods utilizing the self-organization of molecules.