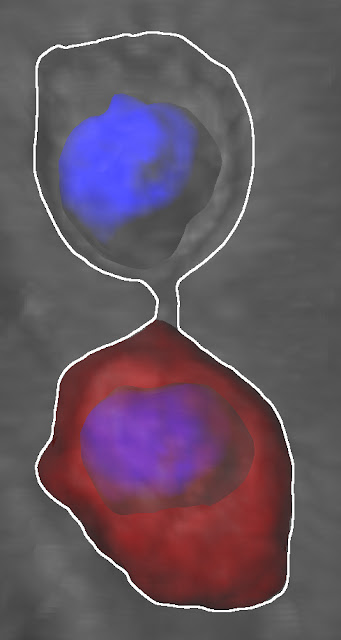 Dividing neural stem cells (outlined with a white line) establish a diffusion
barrier in the endoplasmic reticulum during cell division. This barrier
participates in the asymmetric segregation of aging factors such as ubiquitinated,
damaged proteins (red) during cell division (DNA (blue) of 2 daughter cells at the
end of mitosis). The barrier ensures proper neural stem cell proliferation. (Image: UZH)

(September 18, 2015)  Neural stem cells generate new neurons throughout life in the mammalian brain. However, with advancing age the potential for regeneration in the brain dramatically declines. Scientists of the University of Zurich now identified a novel mechanism of how neural stem cells stay relatively free of aging-induced damage. A diffusion barrier regulates the sorting of damaged proteins during cell division.

Yeast are good for making wine, bread, and brewing beer. But they are also a good model for neural stem cells in the mammalian brain. It was known that with every division cellular aging factors are asymmetrically distributed between the mother and the daughter cell, allowing for rejuvenation and full life span of the daughter independent of the age of the mother cell. At least partially responsible for this is the presence of a diffusion barrier that restricts movement of molecules from one side to the other side of the cell during cell division.

The stem cells asymmetrically segregate damaged proteins (red) between the mother and the
daughter cells (on the left: DNA grey). Responsible for this is a diffusion barrier. The strength
of the barrier weakens with advancing age. This leads to reduced asymmetry of damaged
protein segregation (on the right). (Image: UZH)

A group of scientists led by Sebastian Jessberger of the Brain Research Institute showed now that also the stem cells of the adult mouse brain asymmetrically segregate aging factors between the mother and the daughter cells. Responsible for this is a diffusion barrier in the endoplasmic reticulum (a channel system within the cell that is for example important for protein synthesis and transport). The barrier prevents retention of damaged proteins in the stem cell daughter cell keeping the stem cells relatively clean. «Neural stem cell divisions appear to be much more asymmetric than we had previously anticipated,» states Darcie Moore, postdoc in the group of Sebastian Jessberger and lead author of the study.