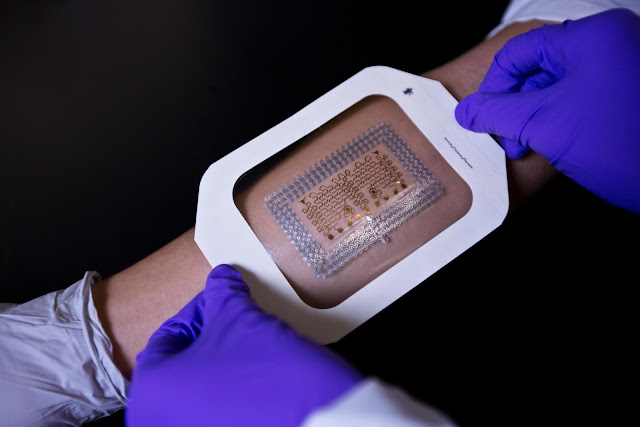 (September 29, 2015)  A team of researchers in the Cockrell School of Engineering at The University of Texas at Austin has invented a method for producing inexpensive and high-performing wearable patches that can continuously monitor the body’s vital signs for human health and performance tracking, potentially outperforming traditional monitoring tools such as cardiac event monitors.

The researchers published a paper on their patent-pending process in Advanced Materials on Sept. 23.

The team’s breakthrough is a repeatable “cut-and-paste” method that cuts manufacturing time from several days to only 20 minutes. The researchers believe their new method is compatible with roll-to-roll manufacturing — an existing method for creating devices in bulk using a roll of flexible plastic and a processing machine.

Reliable, ultrathin wearable electronic devices that stick to the skin like a temporary tattoo are a relatively new innovation. These devices have the ability to pick up and transmit the human body’s vital signals, tracking heart rate, hydration level, muscle movement, temperature and brain activity.

Although it is a promising invention, a lengthy, tedious and costly production process has until now hampered these wearables’ potential.