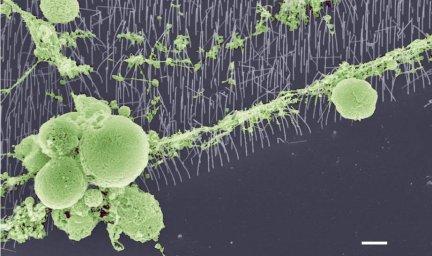 What looks like a bed of nails are actually nanowires. Each outgrowing thread
has a diameter of 80 nanometres (billionths of a metre). The green things
climbing on the nanowires are neurons.

(September 29, 2015)  Neurons thrive and grow in a new type of nanowire material developed by researchers in Nanophysics and Ophthalmology at Lund University in Sweden. In time, the results might improve both neural and retinal implants, and reduce the risk of them losing their effectiveness over time, which is currently a problem.
By implanting electrodes in the brain tissue one can stimulate or capture signals from different areas of the brain. These types of brain implants, or neuro-prostheses as they are sometimes called, are used to treat Parkinson’s disease and other neurological diseases.

They are currently being tested in other areas, such as depression, severe cases of autism, obsessive-compulsive disorders and paralysis. Another research track is to determine whether retinal implants are able to replace light-sensitive cells that die in cases of Retinitis Pigmentosa and other eye diseases.

However, there are severe drawbacks associated with today’s implants. One problem is that the body interprets the implants as foreign objects, resulting in an encapsulation of the electrode, which in turn leads to loss of signal.

“Our nanowire structure prevents the cells that usually encapsulate the electrodes – glial cells – from doing so”, says Christelle Prinz, researcher in Nanophysics at Lund University in Sweden, who developed this technique together with Maria Thereza Perez, a researcher in Ophthalmology.

“I was very pleasantly surprised by these results. In previous in-vitro experiments, the glial cells usually attach strongly to the electrodes”, she says.

To avoid this, the researchers have developed a small substrate where regions of super thin nanowires are combined with flat regions. While neurons grow and extend processes on the nanowires, the glial cells primarily occupy the flat regions in between.