Characterizing the Forces that Hold Everything Together 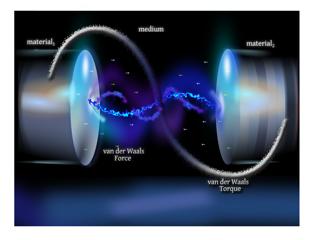 UMass Amherst physicists, with others, provide a new software tool and
database to help materials designers with the difficult calculations needed
to predict the magnitude of van der Waals interactions between anisotropic or
directionally dependent bodies such as those illustrated, with long-range torques.
Though small, these forces are dominant on the nanoscale. Courtesy of UMass Amherst

(September 22, 2015)  As electronic, medical and molecular-level biological devices grow smaller and smaller, approaching the nanometer scale, the chemical engineers and materials scientists devising them often struggle to predict the magnitude of molecular interactions on that scale and whether new combinations of materials will assemble and function as designed.

This is because the physics of interactions at these scales is difficult, say physicists at the University of Massachusetts Amherst, who with colleagues elsewhere this week unveil a project known as Gecko Hamaker, a new computational and modeling software tool plus an open science database to aid those who design nano-scale materials.