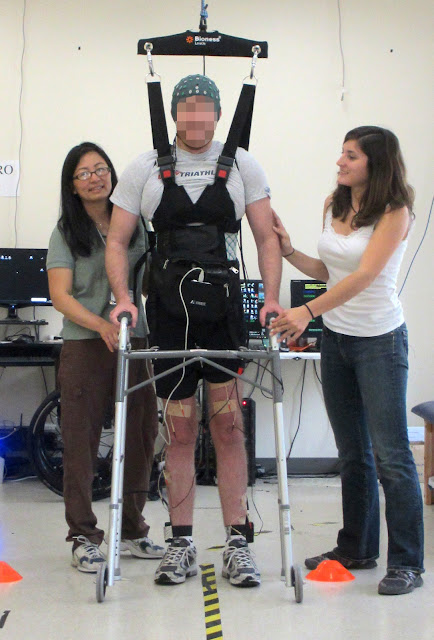 A man whose legs had been paralyzed for five years walks along a 12-foot course using
UCI-developed technology that lets the brain bypass the spinal cord to send messages
to the legs. Courtesy of UCI's Brain Computer Interface Lab.

(September 24, 2015)  Novel brain-computer interface technology created by University of California, Irvine researchers has allowed a paraplegic man to walk for a short distance.

In the preliminary proof-of-concept study, led by UCI biomedical engineer Zoran Nenadic and neurologist An Do, a person with complete paralysis in both legs due to spinal cord injury was able – for the first time – to take steps without relying on manually controlled robotic limbs.

The male participant, whose legs had been paralyzed for five years, walked along a 12-foot course using an electroencephalogram-based system that lets the brain bypass the spinal cord to send messages to the legs. It takes electrical signals from the subject’s brain, processes them through a computer algorithm, and fires them off to electrodes placed around the knees that trigger movement in the leg muscles.