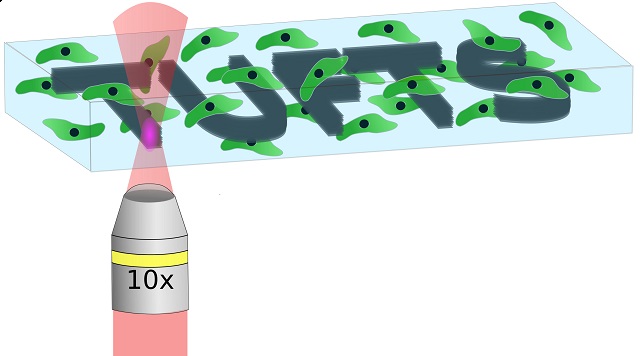 Illustration of laser-based micropatterning of silk hydrogels. The transparent gels enable
the laser's photons to be absorbed more than 10 times deeper than with other materials,
without damaging the cells surrounding the "Tufts" pattern. Courtesy: M.B. A

Artificial tissue growth requires pores, or voids, to bring oxygen and nutrients to rapidly proliferating cells in the tissue scaffold.  Current patterning techniques allow for the production of random, micron-scale pores and the creation of channels that are hundreds of microns in diameter, but there is little in between.

The Tufts researchers used an ultrafast, femtosecond laser to generate scalable, high-resolution 3-D voids within silk protein hydrogel, a soft, transparent biomaterial that supports cell growth and allows cells to penetrate deep within it.  The researchers were able to create voids at multiple scales as small as 10 microns and as large at 400 microns over a large volume.

Further, the exceptional clarity of the transparent silk gels enabled the laser's photons to be absorbed nearly 1 cm below the surface of the gel – more than 10 times deeper than with other materials, without damaging adjacent material.