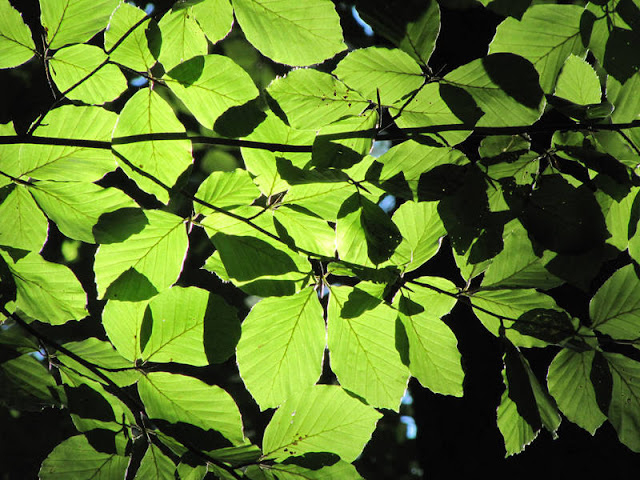 The international researchers investigated the change in the sensitivity of leaf unfolding
to climate warming using observations for dominant European tree species like this beech.
(Photo: Stefanie Ederer)

(September 29, 2015)  The sensitivity of leaf unfolding phenology to climate warming has significantly declined since 1980s, according to a study recently published in the journal Nature by an international collaboration of scientists. Earlier spring leaf unfolding is a frequently observed response of plants to climate warming. Many deciduous tree species require cold temperatures, in other words ‘chilling’, for dormancy release, and the warming-related reductions in chilling may counteract the advance of leaf unfolding in response to warming. Empirical evidence for this, however, was very limited.

To check whether warm winters have already attenuated the advance in spring phenology, an international team of researchers from China, Belgium, France, Spain, Switzerland and Germany investigated the change in the sensitivity of leaf unfolding to climate warming using long-term observations for seven dominant European tree species at 1245 sites in Central Europe.

Their analyses show that leaf unfolding occurred, on average, four days earlier per degree Celcius increase in spring temperature between 1980 and 1994, whereas this advance dropped to 2.3 days per degree between 1999 and 2013, a decrease of over 40 percent. “This lower sensitivity of trees to climate change likely reflects the reduced cold during winter that delays dormancy release. However, we could not fully exclude photoperiod and/or insolation as co-controlling mechanisms. These two factors may also become limiting when leaf unfolding dates occur too early in spring” said Yongshuo H. Fu, the first author of this study.