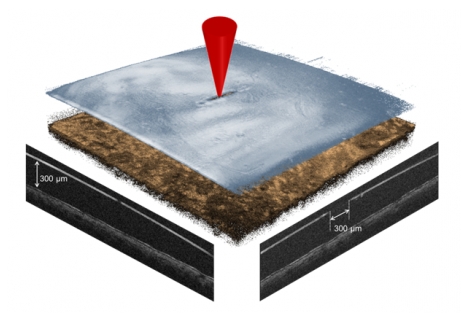 Caption figure 1: 3-D OCT projection of an fs laser membrane cut (symbolic laser focus in red).
The membrane in blue is only 300 µm from the prepared porcine retina in brown.
Individual images from the middle show the geometry. Illustration: LZH

(September 17, 2015)  Several laser-based operations are already established for correcting defective vision. However, this highly precise and yet gentle method cannot be used yet for presbyopia and for adhesions on the retina. In the project IKARUS the Laser Zentrum Hannover e.V. (LZH) and four project partners have combined femtosecond laser technology with optical coherence tomography (OCT) as well as adaptive optics, to expand the range of laser surgery.

In the established femtosecond laser-assisted in situ keratomileusis (fs LASIK), the cornea is cut open using the laser to subsequently correct the defective vision. In order to treat presbyopia however, the tissue has to be cut deeper. The scientists at the LZH and their industrial partners use an fs laser for precisely cutting the lens, creating slip planes and thus making the lens more flexible.
Cutting the eye lens with the laser, without damage
This treatment becomes only possible through an effective visualization of the eye tissue. For this, the Image Guided Laser Surgery Group of the Biomedical Optics Department of the LZH has adapted an OCT imaging unit from the ROWIAK GmbH. With this and a special software it is possible to image the cutting of the eye as well as the laser beam delivery during the operation. Within the project cuts into the eye have already been done without damaging neither the front nor the rear part of the lens capsule. In current clinical studies, the ROWIAK GmbH is further examining this process.