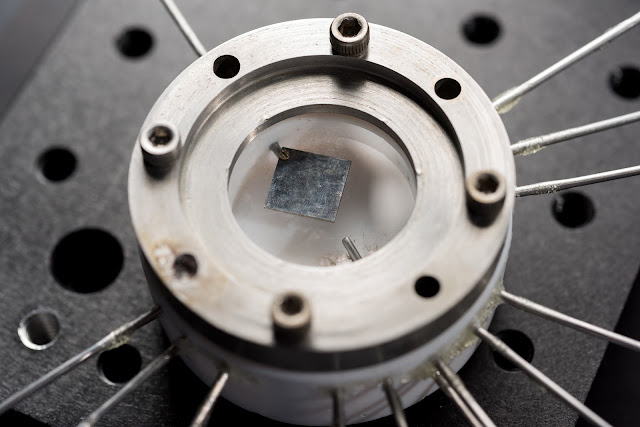 Shown is a sample holder used to test samples of lithiated silicon to determine its nano-mechanical
properties. The device was used to develop a detailed nano-mechanical study of mechanical
degradation processes in silicon thin films. (Credit: Rob Felt, Georgia Tech)

Anodes – the negative electrodes – based on silicon can theoretically store up to ten times more lithium ions than conventional graphite electrodes, making the material attractive for use in high-performance lithium-ion batteries. However, the brittleness of the material has discouraged efforts to use pure silicon in battery anodes, which must withstand dramatic volume changes during charge and discharge cycles.

Using a combination of experimental and simulation techniques, researchers from the Georgia Institute of Technology and three other research organizations have reported surprisingly high damage tolerance in electrochemically-lithiated silicon materials. The work suggests that all-silicon anodes may be commercially viable if battery charge levels are kept high enough to maintain the material in its ductile state. 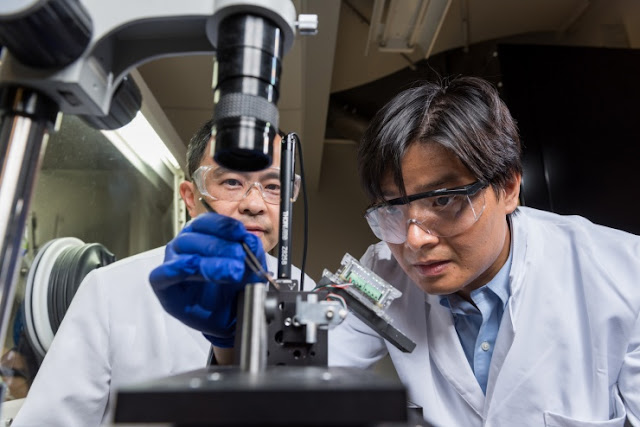 Using the results of the studies, the researchers charted the changing mechanical properties of the silicon structures as a function of their lithium content. By suggesting a range of operating conditions under which the silicon remains ductile, Xia hopes the work will cause battery engineers to take a new look at all-silicon electrodes.

“Our work has fundamental and immediate implications for the development of high-capacity lithium-based batteries, both from practical and fundamental points of view,” he said. “Lithiated silicon can have a very high damage tolerance beyond a threshold value of lithium concentration. This tells us that silicon-based batteries could be made very durable if we carefully control the depth of discharge.”