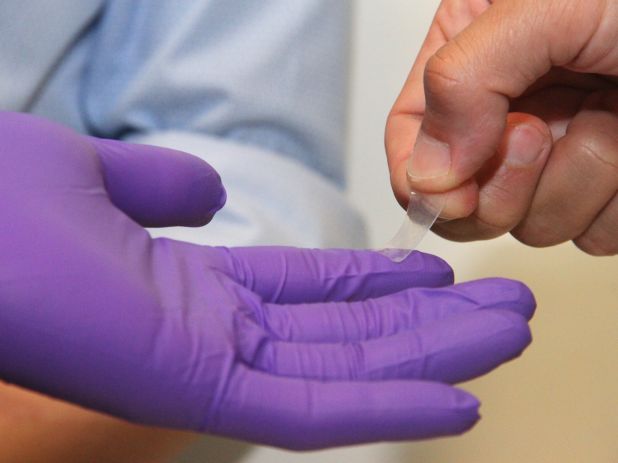 A demonstration on the application of wearable liquid-based microfluidic tactile sensor
on a glove. Photo: Daryl Kang

(September 23, 2015)  A team of scientists from the National University of Singapore (NUS) Faculty of Engineering has developed a wearable liquid-based microfluidic tactile sensor that is small, thin, highly flexible and durable. Simple and cost-effective to produce, this novel device is very suitable for applications such as soft robotics, wearable consumer electronics, smart medical prosthetic devices, as well as real-time healthcare monitoring.

Tactile sensors are data acquisition devices that detect and measure a diversity of properties arising from physical interaction and translate the information acquired to be analysed by an interconnected intelligent system. Conventional tactile sensors that are available today are typically rigid and in solid-state form, restricting various natural body movements when used and may also be subjected to plastic deformation and failure when pressure is exerted, resulting in compromises in conformability, durability and overall robustness.

Addressing the limitations of existing tactile sensors, a team of researchers led by Professor Lim Chwee Teck from NUS’ Department of Biomedical Engineering achieves a significant technological breakthrough by adopting a liquid-based pressure sensing method in the design of such sensors.

The newly developed microfluidic tactile sensor is fabricated on a flexible substrate like silicone rubber, and uses non-corrosive, non-toxic 2D nanomaterial suspension in liquid form, such as graphene oxide, as the pressure sensing element to recognise force-induced changes.