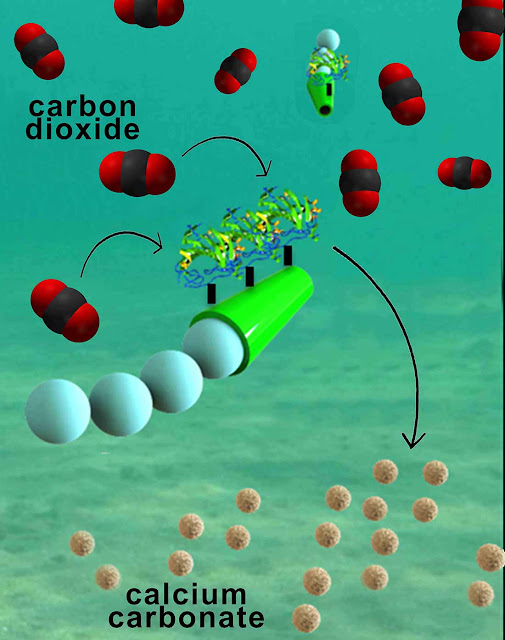 Nanoengineers have invented tiny tube-shaped micromotors that zoom around
in water and efficiently remove carbon dioxide. The surfaces of the micromotors are
functionalized with the enzyme carbonic anhydrase, which enables the motors to help
rapidly convert carbon dioxide to calcium carbonate.
Image credit: Laboratory for Nanobioelectronics, UC San Diego Jacobs School of Engineering.

(September 23, 2015)  Machines that are much smaller than the width of a human hair could one day help clean up carbon dioxide pollution in the oceans. Nanoengineers at the University of California, San Diego have designed enzyme-functionalized micromotors that rapidly zoom around in water, remove carbon dioxide and convert it into a usable solid form.

The proof of concept study represents a promising route to mitigate the buildup of carbon dioxide, a major greenhouse gas in the environment, said researchers. The team, led by distinguished nanoengineering professor and chair Joseph Wang, published the work this month in the journal Angewandte Chemie.

“We’re excited about the possibility of using these micromotors to combat ocean acidification and global warming,” said Virendra V. Singh, a postdoctoral scientist in Wang’s research group and a co-first author of this study.

“In the future, we could potentially use these micromotors as part of a water treatment system, like a water decarbonation plant,” said Kevin Kaufmann, an undergraduate researcher in Wang’s lab and a co-author of the study.