The structural memory of water persists on a picosecond timescale 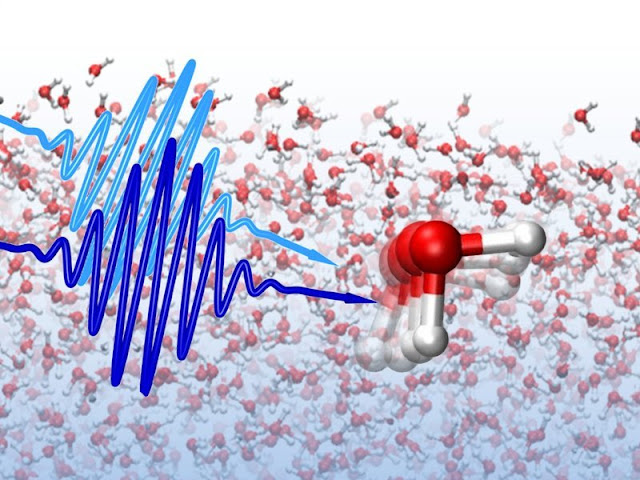 (September 18, 2015)  A team of scientists from the Max Planck Institute for Polymer Research (MPI-P) in Mainz, Germany and FOM Institute AMOLF in the Netherlands have characterized the local structural dynamics of liquid water, i.e. how quickly water molecules change their binding state. Using innovative ultrafast vibrational spectroscopies, the researchers show why liquid water is so unique compared to other molecular liquids. This study has recently been published in the scientific journal Nature Communications.

With the help of a novel combination of ultrafast laser experiments, the scientists found that local structures persist in water for longer than a picosecond, a picosecond (ps) being one thousandth of one billionth of a second (10-12 s). This observation changes the general perception of water as a solvent. “71% of the earth’s surface is covered with water. As most chemical and biological reactions on earth occur in water or at the air water interface in oceans or in clouds, the details of how water behaves at the molecular level are crucial. Our results show that water cannot be treated as a continuum, but that specific local structures exist and are likely very important” says Mischa Bonn, director at the MPI-P.

Water is a very special liquid with extremely fast dynamics. Water molecules wiggle and jiggle on sub-picosecond timescales, which make them undistinguishable on this timescale. While the existence of very short-lived local structures - e.g. two water molecules that are very close to one another, or are very far apart from each other - is known to occur, it was commonly believed that they lose the memory of their local structure within less than 0.1 picoseconds.