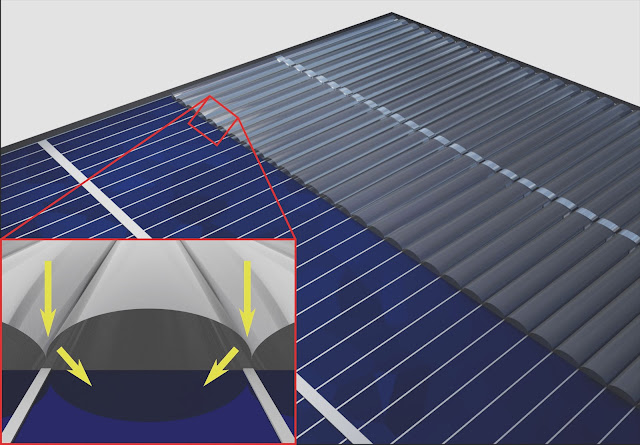 A special invisibility cloak (right) guides sunlight past the contacts for current removal
to the active surface area of the solar cell. (Graphics: Martin Schumann, KIT)

Success of the energy turnaround will depend decisively on the extended use of renewable energy sources. However, their efficiency partly is much smaller than that of conventional energy sources. The efficiency of commercially available photovoltaic cells, for instance, is about 20%. Scientists of Karlsruhe Institute of Technology (KIT) have now published an unconventional approach to increasing the efficiency of the panels. Optical invisibility cloaks guide sunlight around objects that cast a shadow on the solar panel, such as contacts for current extraction. DOI: 10.1364/OPTICA.2.000850.

Energy efficiency of solar panels has to be improved significantly not only for the energy turnaround, but also for enhancing economic efficiency. Modules that are presently mounted on roofs convert just one fifth of the light into electricity, which means that about 80% of the solar energy are lost. The reasons of these high losses are manifold. Up to one tenth of the surface area of solar cells, for instance, is covered by so-called contact fingers that extract the current generated. At the locations of these contact fingers, light cannot reach the active area of the solar cell and efficiency of the cell decreases.