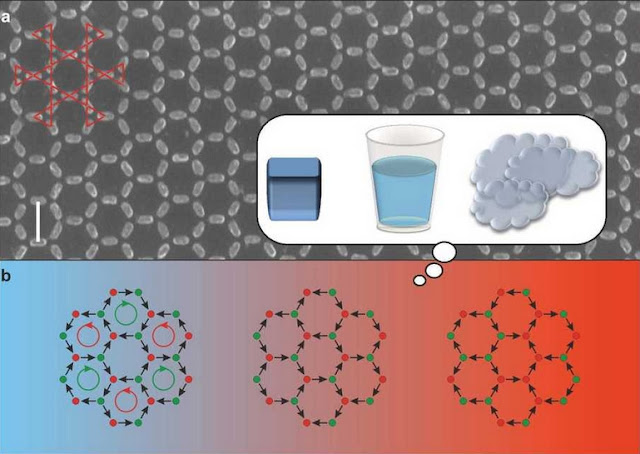 PSI researchers have created a magnetic metamaterial made of long nanomagnets,
arranged in a flat, honeycomb pattern. The arrangement of magnetisation in the synthetic
material assumed very different states at different temperatures – just like molecules in ice
are more ordered than in water, and are in turn more ordered in water than in steam.
(Image: PSI/Luca Anghinolfi)

(September 22, 2015)  Researchers at the Paul Scherrer Institute (PSI) created a synthetic material out of 1 billion tiny magnets. Astonishingly, it now appears that the magnetic properties of this so-called metamaterial change with the temperature, so that it can take on different states; just like water has a gaseous, liquid and a solid state. This material made of nanomagnets might well be refined for electronic applications of the future – such as for more efficient information transfer.

A synthetic material – created from 1 billion nanomagnets – assumes different aggregate states depending on the temperature: the so-called metamaterial exhibits phase transitions, much like those between steam, water and ice. This effect was observed by a team of researchers headed by Laura Heyderman from PSI. “We were surprised and excited,” explains Heyderman. “Only complex systems are able to display phase transitions.” And as complex systems can provide new kinds of information transfer, the result of the new study also reveals that the PSI researchers’ metamaterial would be a potential candidate here.

The major advantage of the synthetic metamaterial is that it can be customised virtually freely. While the individual atoms in a natural material cannot be rearranged with pinpoint precision on such a grand scale, the researchers say that this is possible with the nanomagnets.

The magnets are only 63 nanometres long and shaped roughly like grains of rice. The researchers used a highly advanced technique to place 1 billion of these tiny grains on a flat substrate to form a large-scale honeycomb pattern. The nanomagnets covered a total area of five by five millimetres.