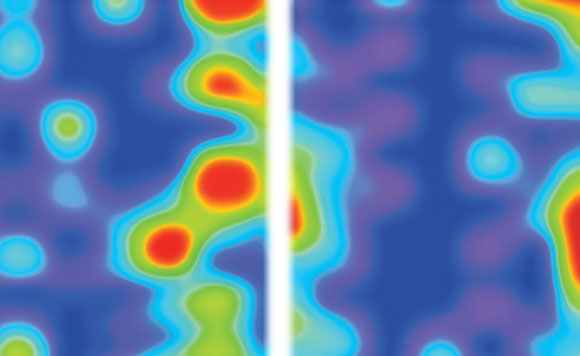 (September 29, 2015)  Researchers at USC and Wake Forest Baptist Medical Center have developed a brain prosthesis that is designed to help individuals suffering from memory loss.

The prosthesis, which includes a small array of electrodes implanted into the brain, has performed well in laboratory testing in animals and is currently being evaluated in human patients.

Designed originally at USC and tested at Wake Forest Baptist, the device builds on decades of research by Ted Berger and relies on a new algorithm created by Dong Song, both of the USC Viterbi School of Engineering. The development also builds on more than a decade of collaboration with Sam Deadwyler and Robert Hampson of the Department of Physiology & Pharmacology of Wake Forest Baptist who have collected the neural data used to construct the models and algorithms.

When your brain receives the sensory input, it creates a memory in the form of a complex electrical signal that travels through multiple regions of the hippocampus, the memory center of the brain. At each region, the signal is re-encoded until it reaches the final region as a wholly different signal that is sent off for long-term storage.

If there’s damage at any region that prevents this translation, then there is the possibility that long-term memory will not be formed. That’s why an individual with hippocampal damage (for example, due to Alzheimer’s disease) can recall events from a long time ago – things that were already translated into long-term memories before the brain damage occurred – but have difficulty forming new long-term memories.

Song and Berger found a way to accurately mimic how a memory is translated from short-term memory into long-term memory, using data obtained by Deadwyler and Hampson, first from animals, and then from humans. Their prosthesis is designed to bypass a damaged hippocampal section and provide the next region with the correctly translated memory.

That’s despite the fact that there is currently no way of “reading” a memory just by looking at its electrical signal.