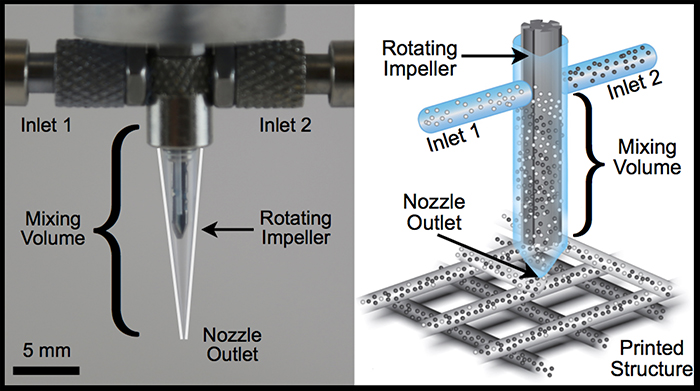 (September 21, 2015)  3D printing is revolutionizing the production of lightweight structures, soft robots and flexible electronics, but the technology struggles with complex, multimaterial integration.
To print a flexible device, including the electronics, a 3D printer must be able to seamlessly transition from a flexible material that moves with your joints for wearable applications, to a rigid material that accommodates the electronic components. It would also need to be able to embed electrical circuitry using multiple inks of varying conductivity and resistivity, precisely switching between them. And, it would be ideal to do all of this without the stopping the printing process.

The ability to integrate disparate materials and properties within printed objects is the next frontier in 3D printing.

Towards this objective, Harvard researchers have designed new multimaterial printheads that mix and print concentrated viscoelastic inks that allow for the simultaneous control of composition and geometry during printing.  Using active mixing and fast-switching nozzles, these novel printheads change material composition on the fly and could pave the way for entirely 3D-printed wearable devices, soft robots, and electronics. 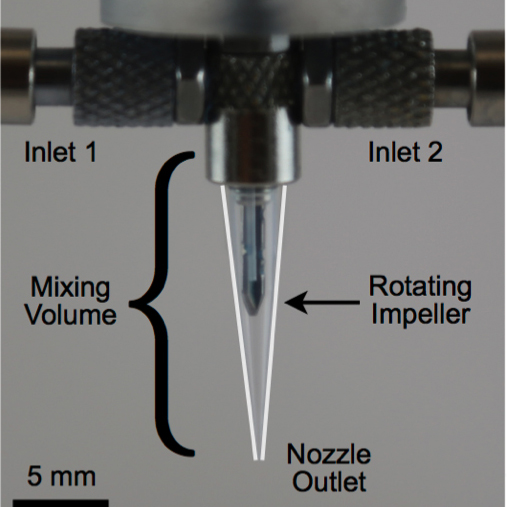 Optical image of the impeller-based active mixer. Each fluid enters
the mixing chamber through a separate inlet and is mixed in a narrow gap
by an impeller rotating at a constant rate.
(photo by Thomas Ober, Harvard SEAS/Wyss Institute)

Mixing complex fluids is fundamental for printing a broad range of materials.   But most mixing approaches are passive, wherein two streams of fluids converge into a single channel where they undergo diffusive mixing. This method works well with low-viscosity fluids, but is ineffective with high-viscosity fluids, like gels, especially in small volumes over short timescales.