Asteroids Found To Be the Moon’s Main ‘Water Supply’ 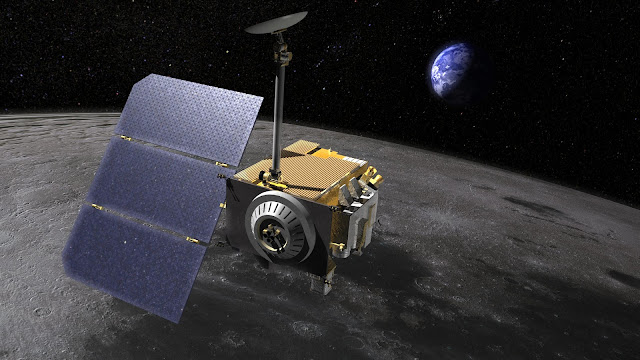 (September 30, 2015)  Water reserves found on the moon are the result of asteroids acting as “delivery vehicles” and not of falling comets as was previously thought. Using computer simulation, scientists from MIPT and the RAS Geosphere Dynamics Institute have discovered that a large asteroid can deliver more water to the lunar surface than the cumulative fall of comets over a billion year period. Their research is discussed in an article recently published in the journal Planetary and Space Science.

At the beginning of the space age, during the days of the Apollo program, scientists believed the moon to be completely dry. At these earliest stages in satellite evolution, the absence of an atmosphere and the influence of solar radiation were thought enough to evaporate all volatile substances into space. However, in the1990s, scientists obtained data from the Lunar Prospector probe that shook their confidence: the neutron current from the satellite surface was indicative of a larger fraction of hydrogen at the near-surface soil of some regions of the moon, which one could interpret as a sign of the presence of water.

In order to explain how water could be kept on the moon’s surface, scientists formulated a theory known as “cold traps.” The axis of the moon’s rotation is nearly vertical, which is why in the polar regions there are craters with floors that are never exposed to sunlight. When comets consisting mostly of water ice fall, evaporated water can gravitate into those “traps” and remain there indefinitely, as solar rays do not evaporate it.

In recent years, lunar missions (the Indian Chandrayan probe, the American LRO, data from the Cassini probe and Deep Impact) have brought scientists two pieces new information. The first is that there are indeed considerate quantities of water and hydroxyl groups in the near-surface soil on the moon. The LCROSS experiment, in which a probe purposely crashed onto the moon resulting in the release of a cloud of gas and dust that was later studied with the use of a spectrometer, directly confirmed the existence of water and other volatile substances. The second piece of new information came when the Russian LEND apparatus mounted on board LRO generated a map of water distribution on the moon’s surface. 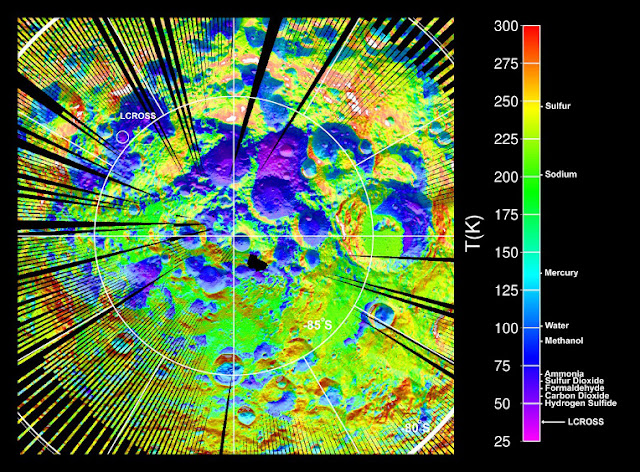 Temperature of the surface around the southern pole of the moon according to LRO data © NASA.

But this second piece has only partly proven their theory: the map of “cold traps” did not correspond to the map of water deposits. The scientists had to refine the theory, and the idea of “lunar congelation” was proposed. It allowed accepting that “survival” of water ice in the regions exposed to sunlight is possible under a soil blanket. It was also suggested that a substantial part of “water” seen by the probes is implanted solar wind: hydrogen atoms from solar wind react with oxygen atoms and form an unstable “dew” of water molecules and hydroxyl groups. Scientists left the possibility open that water could exist in a bound state, i.e. in hydrated minerals.