Surface of the oceans affects climate more than thought 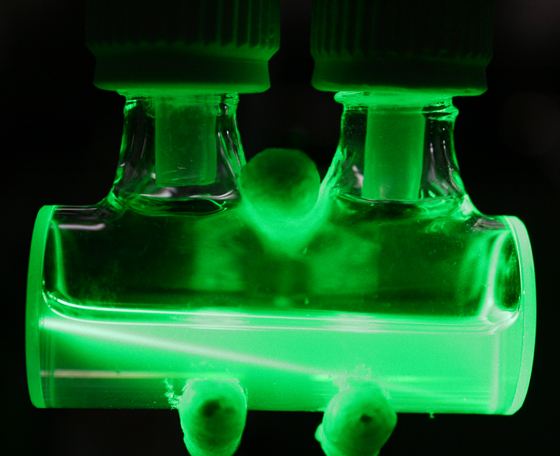 (September 30, 2015)  Lyon/ Leipzig. The oceans seem to produce significantly more isoprene, and consequently affect stronger the climate than previously thought. This emerges from a study by the Institute of Catalysis and Environment in Lyon (IRCELYON, CNRS / University Lyon 1) and the Leibniz Institute for Tropospheric Research (TROPOS), which had studied samples of the surface film in the laboratory. The results underline the global significance of the chemical processes at the border between ocean and atmosphere, write the researchers in the journal Environmental Science & Technology.

Isoprene is a gas that is formed by both the vegetation and the oceans. It is very important for the climate because this gas can form particles that can become clouds and then later affect temperature and precipitation. Previously it was assumed that isoprene is primarily caused by biological processes from plankton in the sea water. The atmospheric chemists from France and Germany, however, could now show that isoprene could also be formed without biological sources in surface film of the oceans by sunlight and so explain the large discrepancy between field measurements and models. The new identified photochemical reaction is therefore important to improve the climate models.

The oceans not only take up heat and carbon dioxide from the atmosphere, they are also sources of various gaseous compounds, thereby affecting the global climate. A key role is played by the so-called surface microlayer (SML),  especially at low wind speed. In these few micrometers thin layer different organic substances such as dissolved organic matter, fat and amino acids, proteins, lipids are accumulating as well as trace metals, dust and microorganisms.

For the now published study, the research team took samples from the Norther Atlantic Ocean. The  surface film was collected in the Raunefjord near Bergen in Norway. For this purpose, a glass plate is immersed in water and then again carefully pulled from the water. The 200 micron thin film sticks to the glass and is then scraped off with a wiper. The sample thus obtained is analyzed in the laboratory later. At the Institute of Catalysis and Environment in Lyon (IRCELYON), which belongs to the French research organization CNRS and the University of Lyon 1, the team investigated its photochemical properties during which collected samples were irradiated with light and the gases were analyzed:  it became clear that isoprene was produced in magtnetudes that were previously attributed solely to plankton. "We were able for the first time trace back the production of this important aerosol precursor  to abiotic sources, so far  global calculations consider only biological sources," explains Dr. Christian George from IRCELYON.