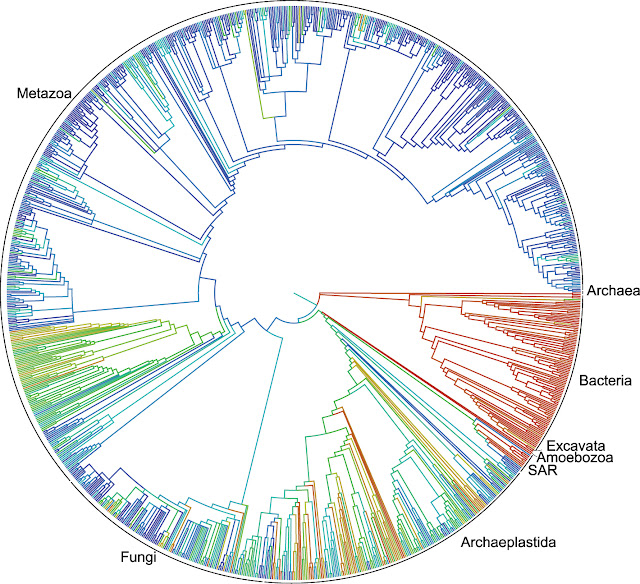 A first draft of the first comprehensive "tree of life," showing the links between
the roughly 2.3 million named species of animals, plants, fungi and microbes.
The draft took three years to complete and was accomplished by combining
more than 450 existing trees. Image credit: Stephen Smith

(September 19, 2015)  A first draft of the "tree of life" for the roughly 2.3 million named species of animals, plants, fungi and microbes has been released, and two University of Michigan biologists played a key role in its creation.

A collaborative effort among 11 institutions, the tree depicts the relationships among living things as they diverged from one another over time, tracing back to the beginning of life on Earth more than 3.5 billion years ago.

Tens of thousands of smaller trees have been published over the years for select branches of the tree of life—some containing upwards of 100,000 species—but this is the first time those results have been combined into a single tree that encompasses all of life. The end result is a digital resource that is available free online for anyone to use or edit, much like a "Wikipedia" for evolutionary trees.

Understanding how the millions of species on Earth are related to one another helps scientists discover new drugs, increase crop and livestock yields, and trace the origins and spread of infectious diseases such as HIV, Ebola and influenza.

"This is the first real attempt to connect the dots and put it all together," said principal investigator Karen Cranston of Duke University. "Think of it as Version 1.0." A paper summarizing the findings was published online in Proceedings of the National Academy of Sciences on Sept. 18.

U-M evolutionary biologist Stephen Smith heads the group that tackled the nitty-gritty details of piecing together all the existing branches, stems and twigs of life's tree into a single diagram. Cody Hinchliff, formerly a postdoctoral researcher in Smith's lab who is now at the University of Idaho, did much of the heavy lifting on the project and shares first-author credits with Smith on the PNAS paper.