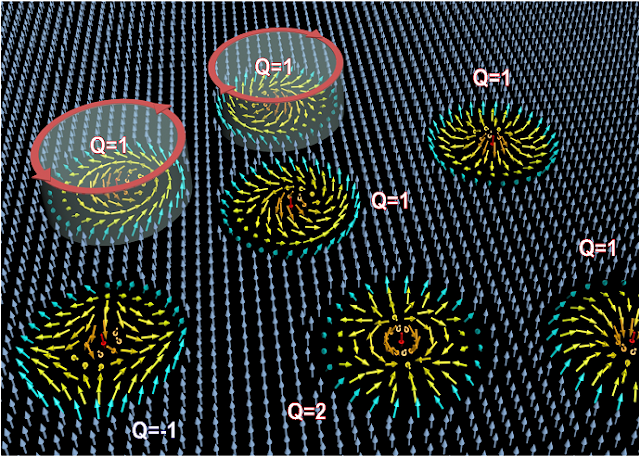 (September 23, 2015)  Theoretical physicists from the University of Groningen, supported by the FOM Foundation, have discovered that so-called ‘frustrated magnets’ can produce skyrmions, tiny magnetic vortices that may be used in memory storage. This discovery opens up a new class of materials for scientists working on ‘skyrmionics’, which aims to build memory and logic devices based on skyrmions. The results are published on todays Nature Communications.

The field of skyrmionics has developed rapidly over the last few years. The very small (around 10 nanometre) magnetic vortices could provide a new way to build memory and logical devices with a very low energy use. ‘In fact, a computer memory system based on magnetic bubbles, which are basically very large skyrmions, was invented in the 1967 at Bell Labs’, explains Maxim Mostovoy, Associate Professor of Theoretical Physics at the University of Groningen. This bubble memory was rapidly overtaken in the 1980s by much smaller silicon-based memory and is now only used for niche applications – it is very robust, has no moving parts and can operate in harsh environments.

So far, skyrmions are only produced in special materials called chiral magnets. The lattice structure of these magnets is chiral, which means the crystal lattice does not have the same properties as its mirror image. ‘To advance the field, new classes of materials are needed’, says Mostovoy. With his post-doc Andrey Leonov (currently working at the Technische Universität Dresden), he discovered that magnetic frustration can produce skyrmions.