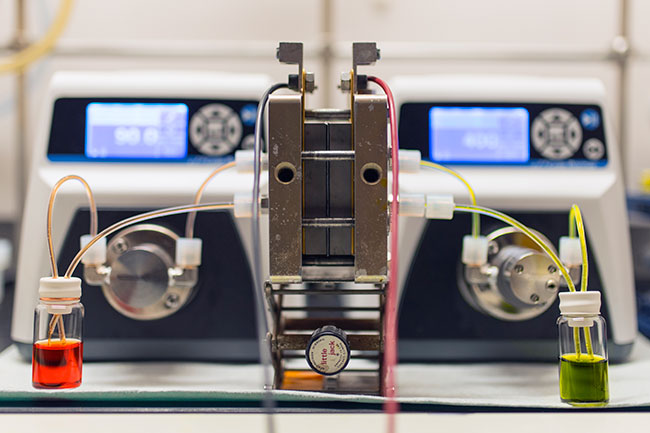 This improved flow battery could make storage of electricity from intermittent energy sources
like solar and wind safe and cost-effective for both residential and commercial use. Unlike
solid-electrode batteries, flow batteries store energy in liquids contained in external tanks
(seen here in red and green), similar to fuel cells.  (Photo courtesy of Kaixiang Lin)

A RECHARGEABLE BATTERY TO POWER A HOME FROM ROOFTOP SOLAR PANELS

(September 24, 2015)   A team of Harvard scientists and engineers has demonstrated a rechargeable battery that could make storage of electricity from intermittent energy sources like solar and wind safe and cost-effective for both residential and commercial use. The new research builds on earlier work by members of the same team that could enable cheaper and more reliable electricity storage at the grid level.

The mismatch between the availability of intermittent wind or sunshine and the variability of demand is a great obstacle to getting a large fraction of our electricity from renewable sources. This problem could be solved by a cost-effective means of storing large amounts of electrical energy for delivery over the long periods when the wind isn't blowing and the sun isn't shining.

In the operation of the battery, electrons are picked up and released by compounds composed of inexpensive, earth-abundant elements (carbon, oxygen, nitrogen, hydrogen, iron and potassium) dissolved in water. The compounds are non-toxic, non-flammable, and widely available, making them safer and cheaper than other battery systems.

“This is chemistry I’d be happy to put in my basement,” says Michael J. Aziz, Gene and Tracy Sykes Professor of Materials and Energy Technologies at Harvard Paulson School of Engineering and Applied Sciences (SEAS), and project Principal Investigator. “The non-toxicity and cheap, abundant materials placed in water solution mean that it’s safe — it can’t catch on fire — and that’s huge when you’re storing large amounts of electrical energy anywhere near people.”