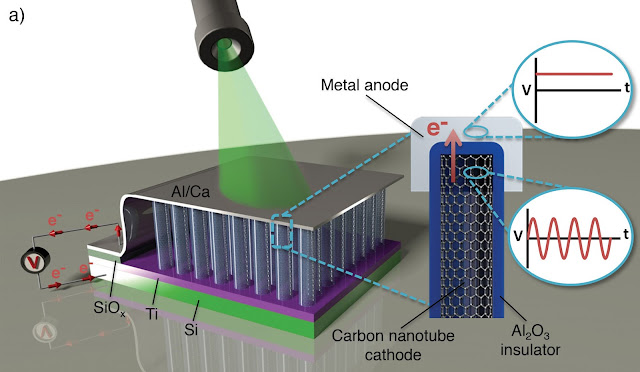 (September 29, 2015)  Using nanometer-scale components, researchers have demonstrated the first optical rectenna, a device that combines the functions of an antenna and a rectifier diode to convert light directly into DC current.

Based on multiwall carbon nanotubes and tiny rectifiers fabricated onto them, the optical rectennas could provide a new technology for photodetectors that would operate without the need for cooling, energy harvesters that would convert waste heat to electricity – and ultimately for a new way to efficiently capture solar energy.

In the new devices, developed by engineers at the Georgia Institute of Technology, the carbon nanotubes act as antennas to capture light from the sun or other sources. As the waves of light hit the nanotube antennas, they create an oscillating charge that moves through rectifier devices attached to them. The rectifiers switch on and off at record high petahertz speeds, creating a small direct current.

Billions of rectennas in an array can produce significant current, though the efficiency of the devices demonstrated so far remains below one percent. The researchers hope to boost that output through optimization techniques, and believe that a rectenna with commercial potential may be available within a year. 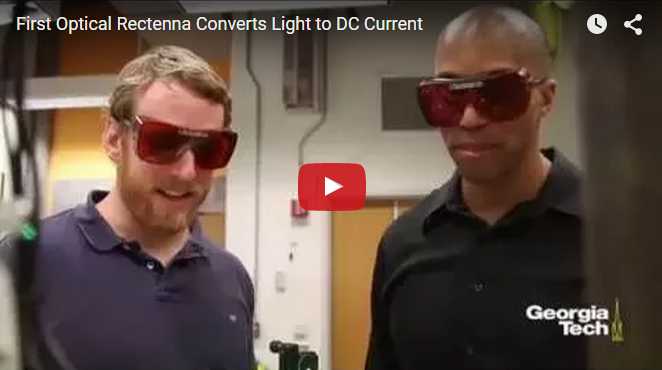 Using nanometer-scale components, researchers have demonstrated the first optical rectenna,
a device that combines the functions of an antenna and a rectifier diode
to convert light directly into DC current.

“We could ultimately make solar cells that are twice as efficient at a cost that is ten times lower, and that is to me an opportunity to change the world in a very big way” said Baratunde Cola, an associate professor in the George W. Woodruff School of Mechanical Engineering at Georgia Tech. “As a robust, high-temperature detector, these rectennas could be a completely disruptive technology if we can get to one percent efficiency. If we can get to higher efficiencies, we could apply it to energy conversion technologies and solar energy capture.”

The research, supported by the Defense Advanced Research Projects Agency (DARPA), the Space and Naval Warfare (SPAWAR) Systems Center and the Army Research Office (ARO), was reported September 28 in the journal Nature Nanotechnology.