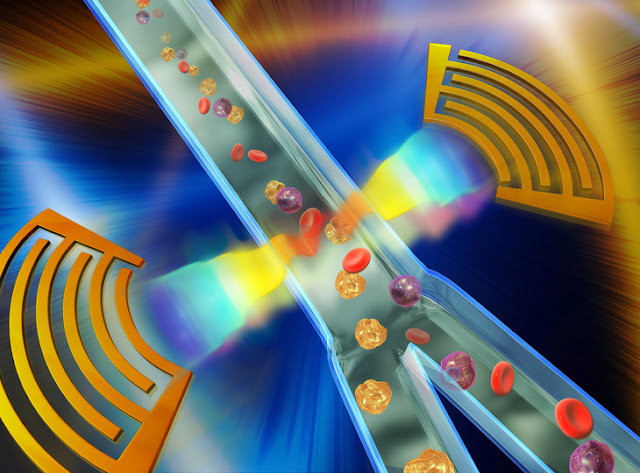 (September 22, 2015)  Commercially available cell sorters can rapidly and accurately aid medical diagnosis and biological research, but they are large and expensive, present a biohazard and may damage cells. Now a team of researchers has developed a cell sorter based on acoustic waves that can compete with existing fluorescence-activated cell sorters and is an inexpensive lab on a chip.

"The current benchtop cell sorters are too expensive, too un-safe, and too high-maintenance," said Tony Jun Huang, Penn State professor of engineering science and mechanics. "More importantly, they have very low biocompatibility. The cell-sorting process can reduce cell viability and functions by 30 to 99 percent for many fragile or sensitive cells such as neurons, stem cells, liver cells and sperm cells. We are developing an acoustic cell sorter that has the potential to address all these problems."

The researchers achieve the speed by using focused interdigital transducers to create standing surface acoustic waves. When the waves are not focused, the acoustic field spreads out, slowing the sorting process. The narrow field allows the sorting to take place at high speed while gently manipulating individual cells.