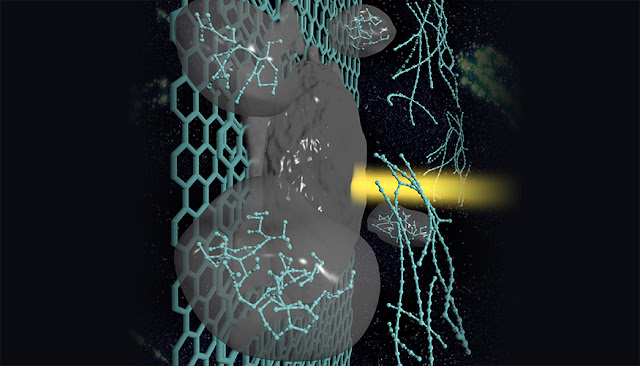 A carbyne strand forms in laser-melted graphite. Carbyne is found in astrophysical bodies
and has the potential to be used in nanoelectronic devices and superhard materials.
Image by Liam Krauss/LLNL

The smallest of electronics could one day have the ability to turn on and off at an atomic scale.

(September 17, 2015)  Lawrence Livermore National Laboratory scientists have investigated a way to create linear chains of carbon atoms from laser-melted graphite. The material, called carbyne, could have a number of novel properties, including the ability to adjust the amount of electrical current traveling through a circuit, depending on the user’s needs.

Carbyne is the subject of intense research because of its presence in astrophysical bodies, as well as its potential use in nanoelectronic devices and superhard materials. Its linear shape gives it unique electrical properties that are sensitive to stretching and bending, and it is 40 times stiffer than diamond. It also was found in the Murchison and Allende meteorites and could be an ingredient of interstellar dust.

Using computer simulations, LLNL scientist Nir Goldman and colleague Christopher Cannella, an undergraduate summer researcher from Caltech, initially intended to study the properties of liquid carbon as it evaporates, after being formed by shining a laser beam on the surface of graphite. The laser can heat the graphite surface to a few thousands of degrees, which then forms a fairly volatile droplet. To their surprise, as the liquid droplet evaporated and cooled in their simulations, it formed bundles of linear chains of carbon atoms.