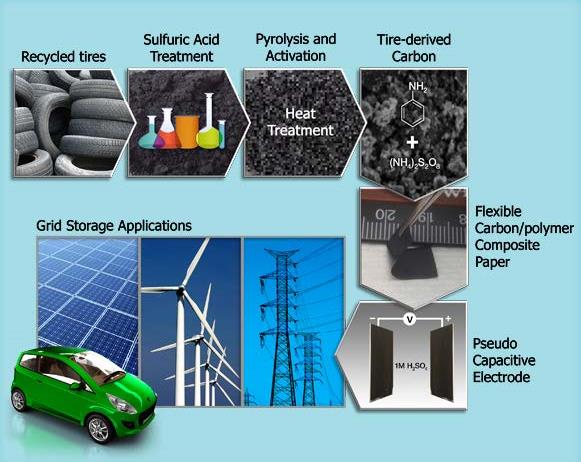 Instead of ending up in landfills, old tires can supply a key ingredient for
supercapacitors to help power the nation.

(September 25, 2015)  Some of the 300 million tires discarded each year in the United States alone could be used in supercapacitors for vehicles and the electric grid using a technology developed at the Department of Energy’s Oak Ridge National Laboratory and Drexel University.

By employing proprietary pretreatment and processing, a team led by Parans Paranthaman has created flexible polymer carbon composite films as electrodes for supercapacitors. These devices are useful in applications for cars, buses and forklifts that require rapid charge and discharge cycles with high power and high energy density. Supercapacitors with this technology in electrodes saw just a 2 percent drop after 10,000 charge/discharge cycles.

The technology, described in a paper published in ChemSusChem by Wiley-VCH, follows an ORNL discovery of a method to use scrap tires for batteries. Together, these approaches could provide some relief to the problems associated with the 1.5 billion tires manufacturers expect to produce annually by 2035.

“Those tires will eventually need to be discarded, and our supercapacitor applications can consume several tons of this waste,” Paranthaman said. “Combined with the technology we’ve licensed to two companies to convert scrap tires into carbon powders for batteries, we estimate consuming about 50 tons per day.”