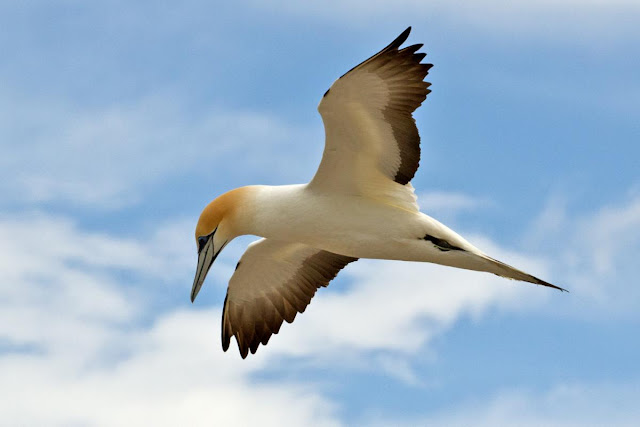 (September 28, 2015)  Offshore wind farms which are to be built in waters around the UK could pose a greater threat to protected populations of gannets than previously thought, according to a new study by researchers at the universities of Leeds, Exeter and Glasgow.

It was previously thought that gannets, which breed in the UK between April and September each year, generally flew well below the minimum height of 22 metres above sea level swept by the blades of offshore wind turbines.

However, while this is the case when the birds are simply commuting between their nest sites and distant feeding grounds, this new study shows that they fly at an average height of 27 metres above sea level when actively searching and diving for prey.

Crucially, the study also shows that the birds' feeding grounds overlap extensively with planned wind farm sites in the Firth of Forth, heightening their risk of colliding with turbine blades.
The researchers estimate that up to 12 times more gannets could be killed by turbines than current figures suggest, although they stress that the figure is based on calculations using current typical turbine sizes, which could be different to those actually installed, and that there is great uncertainty over actual turbine avoidance rates.