Opening up product design to the consumer through 3D printing 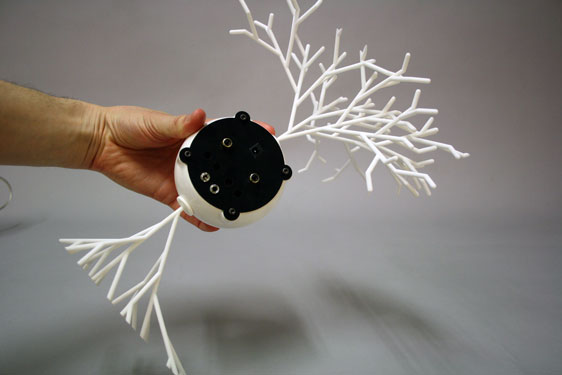 Speaker that grows in a piece of furniture, the shape is generated
by an algorithm to suit one’s physical space.

(September 28, 2015)  Through the use of 3D printing, product designers can enable the consumer to design their own everyday products thereby creating more meaningful products for people and more value for companies. These are some of the conclusions Guido Hermans draws in his dissertation, which he defends at Umeå Institute of Design on Tuesday 6 October.

“The two questions that I have focused on are: How will the roles of the professional designer and the layperson change when the latter engages in the design of personal products? And, how can designers develop digital-physical toolkits for the layperson to collaboratively create value and meaning?” says Guido Hermans.

In his research, Guido Hermans has investigated a way to open up design to the consumer and how to give this group an active role in the design of everyday products.