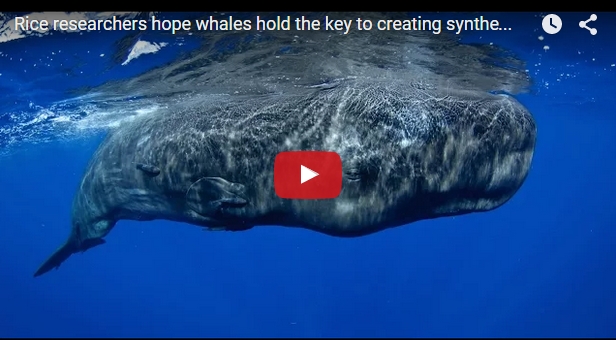 (September 26, 2015)  The ultra-stable properties of the proteins that allow deep-diving whales to remain active while holding their breath for up to two hours could help Rice University biochemist John Olson and his colleagues finish a 20-year quest to create lifesaving synthetic blood for human trauma patients. 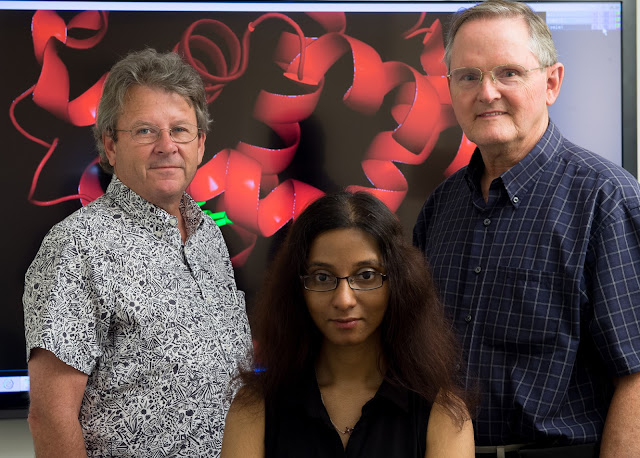 CAPTION: From left, Rice University biochemists George Phillips, Premila Samuel and
John Olson use a 3-D visualization facility to study the structure and function of myoglobin (red)
in the hopes of making recombinant hemoglobin as artificial blood for use in transfusions.
Myoglobin and hemoglobin use a molecule called heme (green) to transport oxygen.
CREDIT: Jeff Fitlow/Rice University

In a new study featured this week in the Journal of Biological Chemistry, Olson and colleagues George Phillips, Lucian Smith and Premila Samuel compared the muscle protein myoglobin from humans, whales and other deep-diving mammals. Myoglobin holds oxygen for ready use inside muscle cells, and the study found that marine mammals have ultra-stable versions of myoglobin that tend not to unfold. The researchers found that stability was the key for cells to make large amounts of myoglobin, which is explains why deep-diving mammals can load their muscle cells with far more myoglobin than humans. 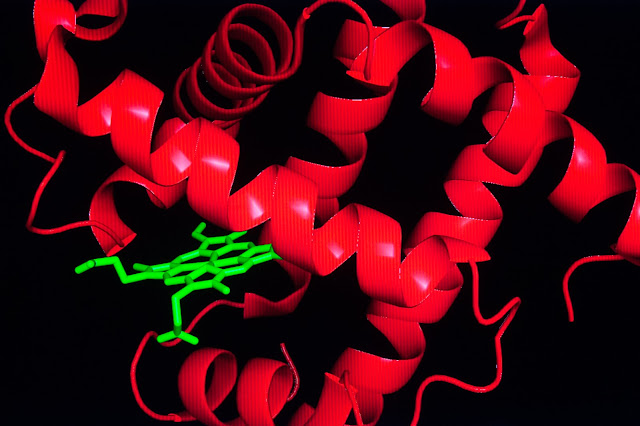 CAPTION: The shape of myoglobin (red) includes a waterproof pocket that is used to store
heme (green), a molecule that allows myoglobins and hemoglobins to transport oxygen.
CREDIT: Jeff Fitlow/Rice University

“Whales and other deep-diving marine mammals can pack 10-20 times more myoglobin into their cells than humans can, and that allows them to ‘download’ oxygen directly into their skeletal muscles and stay active even when they are holding their breath,” said Olson, Rice’s Ralph and Dorothy Looney Professor of Biochemistry and Cell Biology. “The reason whale meat is so dark is that it’s filled with myoglobin that is capable of holding oxygen. But when the myoglobin is newly made, it does not yet contain heme. We found that the stability of heme-free myoglobin is the key factor that allows cells to produce high amounts of myoglobin.”

That’s important to Olson because he wants to create a strain of bacteria that can generate massive quantities of another protein that’s closely related to myoglobin. Olson has spent two decades studying hemoglobin, a larger, more complex oxygen-carrying protein in blood. Olson’s goal is to create synthetic blood for use in transfusions. Hospitals and trauma specialists currently rely on donated whole blood, which is often in short supply and has a limited storage life. A crucial part of Olson’s plan is maximizing the amount of hemoglobin that a bacterium can express.