A new form of real gold, almost as light as air 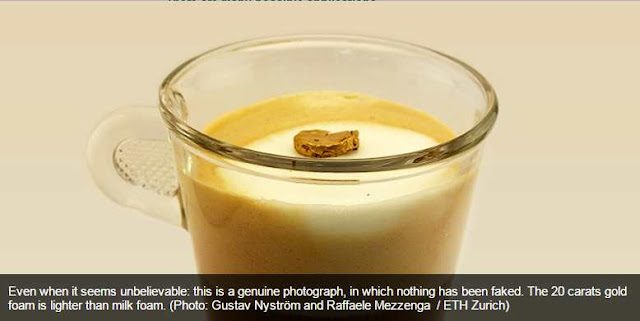 (November 25, 2015)  Researchers at ETH Zurich have created a new type of foam made of real gold. It is the lightest form ever produced of the precious metal: a thousand times lighter than its conventional form and yet it is nearly impossible to tell the difference with the naked eye. There are many possible applications.

A nugget of real 20 carats gold, so light that it does not sink in a cappuccino, floating instead on the milk foam – what sounds unbelievable has actually been accomplished by researchers from ETH Zurich. Scientists led by Raffaele Mezzenga, Professor of Food and Soft Materials, have produced a new kind of foam out of gold, a three-dimensional mesh of gold that consists mostly of pores. It is the lightest gold nugget ever created. "The so-called aerogel is a thousand times lighter than conventional gold alloys. It is lighter than water and almost as light as air," says Mezzenga.

The new gold form can hardly be differentiated from conventional gold with the naked eye – the aerogel even has a metallic shine. But in contrast to its conventional form, it is soft and malleable by hand. It consists of 98 parts air and only two parts of solid material. Of this solid material, more than four-fifths are gold and less than one-fifth is milk protein fibrils. This corresponds to around 20 carat gold.

The scientists created the porous material by first heating milk proteins to produce nanometre-fine protein fibres, so-called amyloid fibrils, which they then placed in a solution of gold salt. The protein fibres interlaced themselves into a basic structure along which the gold simultaneously crystallised into small particles. This resulted in a gel-like gold fibre network. 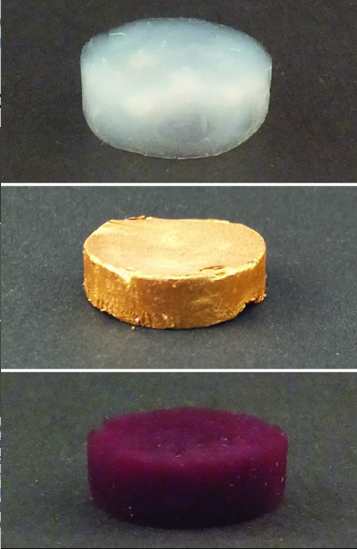 "One of the big challenges was how to dry this fine network without destroying it," explains Gustav Nyström, postdoc in Mezzenga's group and first author of the corresponding study in the journal Advanced Materials. As air drying could damage the fine gold structure, the scientists opted for a gentle and laborious drying process using carbon dioxide. They did so in an interdisciplinary effort assisted by researchers in the group of Marco Mazzotti, Professor of Process Engineering.