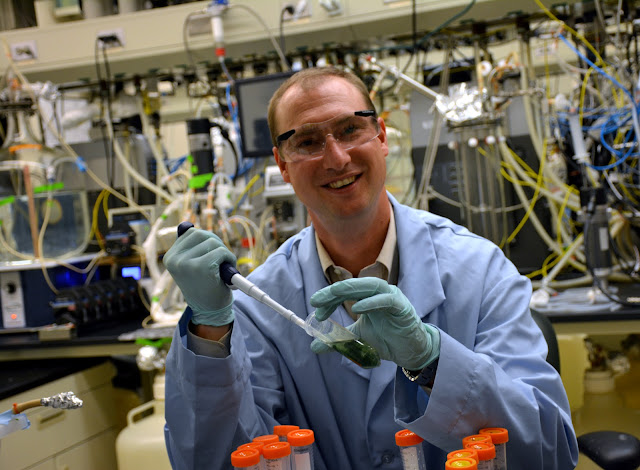 Hans Bernstein: Understanding what happens in nature so we can sustain
people on a healthy planet

Scientists find a surprise in how Cyanothece creates hydrogen

(November 11, 2015)  In the quest for renewable fuels, scientists are taking lessons from a humble bacterium that fills our oceans and covers moist surfaces the world over. While the organism captures light to make food in a process called photosynthesis, scientists have found that it simultaneously uses the energy from that captured light to produce hydrogen.

While the nuances of how microbes draw upon sunlight, water, and elements like carbon and nitrogen to survive may seem detached and remote from modern life, such knowledge is central to our ability to meet the energy needs of our planet's growing population.

"The ultimate goal here is to take energy from the sun, and water, and produce useable energy," said microbiologist Alex Beliaev, one of two scientists at the Department of Energy's Pacific Northwest National Laboratory who led the research. "The more we know about the pathways involved in this process, the more likely we will be able to find a facile and economic way to produce renewable energy. The organisms that produce clean energy naturally provide a blueprint of sorts for how we might do this." 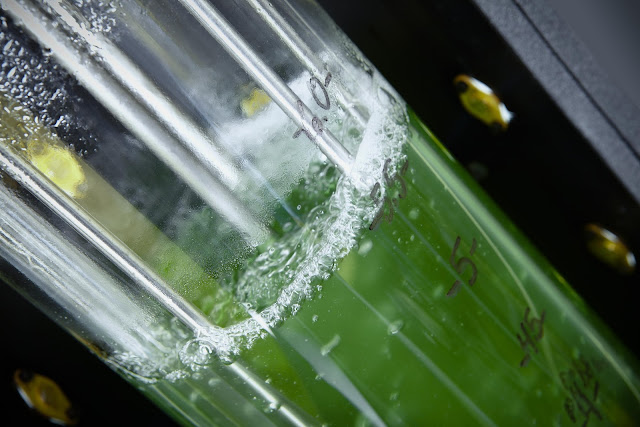 Cyanothece 51142 – a workhorse for natural hydrogen production – in a bioreactor

The latest finding, published in Scientific Reports, concerns a cyanobacterium known as Cyanothece 51142, a type of bacteria also called blue-green algae that produces hydrogen — a resource that is one focus of the worldwide push toward renewable energy.

PNNL scientists found that the organism taps into an unexpected source of energy to create hydrogen. Researchers have known that 51142 makes hydrogen by drawing upon sugars that it has stored during growth. In this study, PNNL researchers found that the organism also draws on a second source of energy, using sunlight and water directly to make hydrogen.