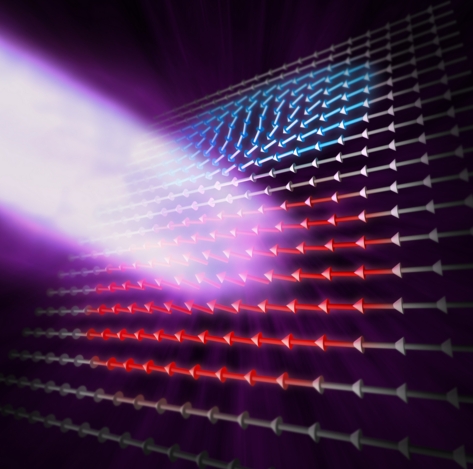 X-rays at SSRL (purple) measure a special type of magnetic wave, called a spin wave soliton,
that has the ability to hold its shape as it moves across a magnetic material. The arrows,
like reorienting compass needles, represent localized changes in the material's
magnetic orientation. (SLAC National Accelerator Laboratory)

(November 16, 2015)  Researchers used a powerful, custom-built X-ray microscope at the Department of Energy's SLAC National Accelerator Laboratory to directly observe the magnetic version of a soliton, a type of wave that can travel without resistance. Scientists are exploring whether such magnetic waves can be used to carry and store information in a new, more efficient form of computer memory that requires less energy and generates less heat.

Magnetic solitons are remarkably stable and hold their shape and strength as they travel across a magnetic material, just as tsunamis maintain their strength and form while traversing the ocean. This offers an advantage over materials used in modern electronics, which require more energy to move data due to resistance, which causes them to heat up.

In experiments at SLAC’s Stanford Synchrotron Radiation Lightsource, a DOE Office of Science User Facility, researchers captured the first X-ray images of solitons and a mini-movie of solitons that were generated by hitting a magnetic material with electric current to excite rippling magnetic effects. Results from two independent experiments were published Nov. 16 in Nature Communications and Sept. 17 in Physical Review Letters.

“Magnetism has been used for navigation for thousands of years and more recently to build generators, motors and data storage devices,” said co-author Hendrik Ohldag, a scientist at SSRL. “However, magnetic elements were mostly viewed as static and uniform. To push the limits of energy efficiency in the future we need to understand better how magnetic devices behave on fast timescales at the nanoscale, which is why we are using this dedicated ultrafast X-ray microscope.”

An ultrafast camera coupled to a custom-built X-ray microscope at SLAC's
Stanford Synchrotron Radiation Lightsource allowed researchers to produce a six-frame “movie”
of the soliton’s motion. It took about 12 hours to record enough X-ray data
to produce the movie. (Stefano Bonetti/Stockholm University)

“This is an exciting observation because it shows that small magnetic waves – known as spin-waves – can add up to a large one in a magnet,” explains Andrew Kent, a professor of physics at New York University and a senior author for one of the studies.. “A specialized X-ray method that can focus on particular magnetic elements with very high resolution enabled this discovery and should enable many more insights into this behavior.”

Solitons are a form of spin waves, which are disturbances that propagate in a magnetic material as a patterned, rippling response in the material’s electrons. This response is related to the spin of electrons, a fundamental particle property that can be thought of as either “up” or “down” – like the head or tail sides of a coin.