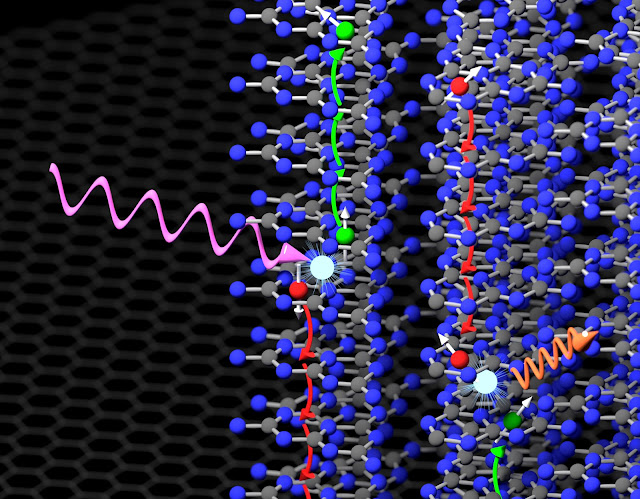 Charge carriers in polymeric carbon nitrides always take paths perpendicular to the sheets,
as Merschjann’s group has now shown. Light creates an electron-hole pair. The opposite
happens when an electron and hole meet under certain conditions (forming a singlet exciton)
and emit light (fluorescence). A graphene lattice is shown in the background.
Image: C. Merschjann

Polymeric carbon nitride is an organic material with interesting optoelectronic properties. As an inexpensive photocatalyst, it can be used to facilitate water splitting using sunlight. Joint research by Helmholtz-Zentrum Berlin, the University of Rostock, Freie Universität Berlin as well as other partners has now investigated for the first time how light creates charge carriers in this class of materials and established details about charge mobility and lifetimes. They discovered surprising characteristics in their investigations that provide prospects for new applications, in conjunction with graphene for example.

Polymeric carbon nitrides are organic compounds synthesised to form a yellow powder of a myriad of nanocrystals. The crystalline structure resembles that of graphite because the carbon nitride groups are chemically bound only in layers, while just weak Van der Waals forces provide cohesion between these layers. It was already known that light is able to create an electron-hole pair in this class of materials. So there have already been numerous attempts to employ polymeric carbon nitrides as cost-effective photocatalysts for solar-powered water splitting. However, the efficiency levels so far have remained comparatively low.