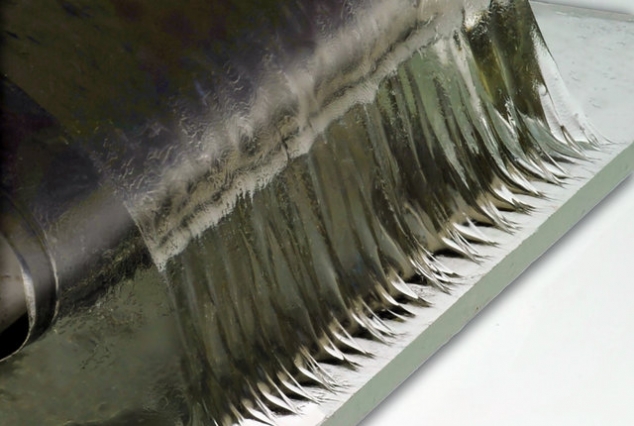 Engineered hydrogel being pulled away from a glass surface. The material shows
a property called “tough wet adhesion” comparable to tendon and bone interface.
The wavy edge instability at the interface is a hallmark of strongly adhered soft
material on a rigid surface. Image: Felice Frankel

New “water adhesive” is tougher than natural adhesives employed by mussels and barnacles.

(November 9, 2015)  Nature has developed innovative ways to solve a sticky challenge: Mussels and barnacles stubbornly glue themselves to cliff faces, ship hulls, and even the skin of whales. Likewise, tendons and cartilage stick to bone with incredible robustness, giving animals flexibility and agility.

The natural adhesive in all these cases is hydrogel — a sticky mix of water and gummy material that creates a tough and durable bond.

Now engineers at MIT have developed a method to make synthetic, sticky hydrogel that is more than 90 percent water. The hydrogel, which is a transparent, rubber-like material, can adhere to surfaces such as glass, silicon, ceramics, aluminum, and titanium with a toughness comparable to the bond between tendon and cartilage on bone.

In experiments to demonstrate its robustness, the researchers applied a small square of their hydrogel between two plates of glass, from which they then suspended a 55-pound weight. They also glued the hydrogel to a silicon wafer, which they then smashed with a hammer. While the silicon shattered, its pieces remained stuck in place.

Such durability makes the hydrogel an ideal candidate for protective coatings on underwater surfaces such as boats and submarines. As the hydrogel is biocompatible, it may also be suitable for a range of health-related applications, such as biomedical coatings for catheters and sensors implanted in the body.

“You can imagine new applications with this very robust, adhesive, yet soft material,” says Xuanhe Zhao, the Robert N. Noyce Career Development Associate Professor in MIT’s Department of Mechanical Engineering. For example, Zhao’s group is currently exploring uses for the hydrogel in soft robotics, where the material may serve as synthetic tendon and cartilage, or in flexible joints.