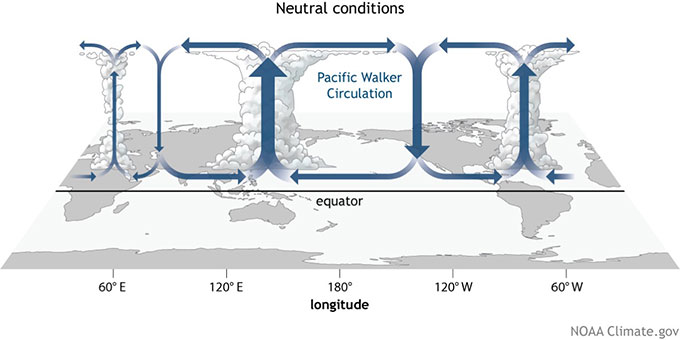 (November 5, 2015)  A new analysis using changes in cloud cover over the tropical Indo-Pacific Ocean showed that a weakening of a major atmospheric circulation system over the last century is due, in part, to increased greenhouse gas emissions. The findings from researchers at the University of Miami (UM) Rosenstiel School of Marine and Atmospheric Science provide new evidence that climate change in the tropical Pacific will result in changes in rainfall patterns in the region and amplify warming near the equator in the future.

“Our findings show that an increasing concentration of greenhouse gases leads to significant changes in atmospheric circulation and tropical rainfall patterns,” said Katinka Bellomo, an alumna of the UM Rosenstiel School. “This study demonstrates that we can predict these changes in the Walker circulation from changes in cloud cover.”

The UM Rosenstiel School researchers used historical observations of cloud cover as a proxy for wind velocity in climate models to analyze the Walker circulation, the atmospheric air flow and heat distribution in the tropic Pacific region that affects patterns of tropical rainfall. Their findings revealed a weakening and eastward shift of the Walker circulation over the last century due to greenhouse gas emissions.  The analysis showed that changes in cloud cover can serve as a proxy in climate models for wind velocity in the atmosphere, which cannot be directly measured.

“This study makes innovative use of a decades old-dataset,” said Amy Clement, professor of atmospheric science at the UM Rosenstiel School. “It is impressive that visual observations from the decks of ships transiting the Pacific Ocean over a half-century can tell us something so fundamental about climate change.”

This new information can be incorporated into current climate models to predict future changes in the magnitude and pattern of the Walker Circulation due to increased greenhouse gas emissions. The study suggests that rainfall will decrease over Indonesia and in the western Pacific and increase over the central Pacific Ocean.