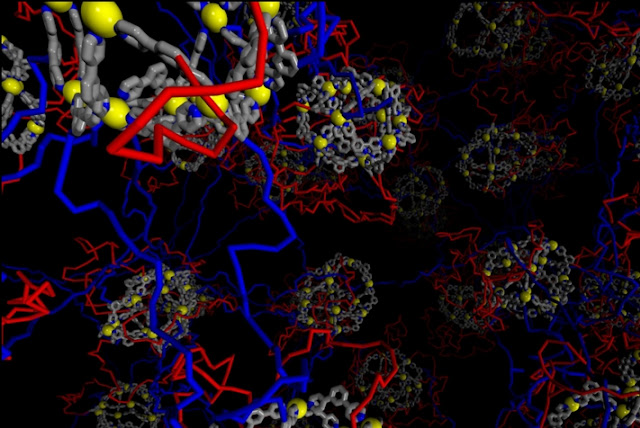 MIT chemists have created a new type of gel by linking metal organic cages with
long polymer strands (blue). The red polymer strands, which loop back to the cages,
can be used to further customize the gels by adding other molecules.
Image courtesy of the researchers.

New materials could be tuned for applications including drug delivery and water filtration.

MIT chemists have created a new material that combines the flexibility of polymer gels with the rigid structure provided by metal-based clusters. The new gels could be well-suited for a range of possible functions, including drug release, gas storage, or water filtration, the researchers say.

These new gels, known as polyMOCs, are a hybrid of two materials called metallogels and metal organic cages. Metallogels, which consist of metals bound to polymer chains, are similar to regular polymer gels in that they are soft and viscoelastic. Metal organic cages (MOCs), on the other hand, have a rigid structure and tend to form crystalline materials.

“One can imagine a class of materials that borrows from both of those, and so has the well-defined, self-assembled structures of the MOCs, but also has the viscoelastic properties of a polymer gel. That’s what we’ve tried to make,” says Jeremiah Johnson, the Roger and Georges Firmenich Assistant Professor of Natural Product Chemistry and the senior author of a paper describing the gels in Nature Chemistry.

The paper’s lead author is Aleksandr Zhukhovitskiy, a graduate student in MIT’s Department of Chemistry.

To create these gels, Johnson and colleagues built on a technique known as metallo-supramolecular assembly. This strategy allows chemists to generate three-dimensional shapes, such as spheres, paddlewheels, or pyramids, by mixing polymers that are attached to molecules called ligands. These ligands are organic compounds that can bind to a metal atom.